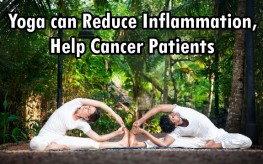 More than 20 million people are now practicing yoga in the US, and for good reason. New studies are constantly coming out corroborating the endless benefits of the practice. From boosting brain power, to reducing stress, and even reversing diabetes or heart disease, yoga’s list of benefits grows longer. Now, a recent study led by Janice Kiecolt-Glaser, professor of psychiatry and psychology at Ohio State University, shows how cancer patients can now benefit from yoga, too.

Published in the Journal of Clinical Oncology, this study is the largest of its kind to use biological measures to assess results. In this way, it isn’t just subjective information telling us that downward facing dog, breathing practices, and sun salutation are working. The scientific evidence is in the body’s biological markers themselves.

The results of the study are impressive. Not only did cancer patients benefit from the practice of yoga, with marked differences in the key indicator of many chronic diseases known as inflammation, but they enjoyed lowered inflammation after practicing for just 90 minutes, twice a week, for 12 weeks.

For cancer survivors, inflammation is often the reason they feel fatigued for months, even years after cancer treatments, so being able to reduce this biological indicator of health results in massive, positive changes for those just getting back on their feet.  The group that practiced yoga felt less fatigue and more vitality after just three months of the practice.

The Proof is in the Lab Results

Researchers didn’t just rely on subjective comments from the participants, though. Kiecolt-Glaser’s husband and research partner, Ronald Glaser of the university’s department of molecular virology, immunology, and medical genetics, went for more irrefutable laboratory proof. He examined three cytokines – proteins in the blood that are markers for inflammation.

When blood tests were taken and these cytokines were observed in samples, they were all lowered by 10 to 15%. Since the research project was only three months in duration, there is no telling if the continued practice of yoga could possibly lower inflammation even further, but it is likely. This offers some rare biological evidence that yoga is indeed a ‘healing miracle’ and is not just snake oil being proselytized by yoga enthusiasts.

While the researchers aren’t exactly sure how yoga actually worked to reduce inflammation, ancient yogis know that the pranic energy generated through the body has the ability to heal on multiple levels – from the physical to the energetic.

They did; however, suggest some research-based suggestions on how to use yoga to help people even further. Cancer treatments often result in patients with high levels of stress and fatigue, and an inability to sleep well. “Poor sleep fuels fatigue, and fatigue fuels inflammation,” says Kiecolt-Glaser. Yoga has been shown to reduce stress and help people sleep better.

This is great news for cancer patients who want to recover more quickly from treatment, and for others who want to mitigate the effects of heart disease, diabetes, arthritis, and other inflammation-based diseases.