These Statistics Prove GMOs Are Absolutely Not ‘Feeding America’

Even with GMOs - People are Still Starving

You would not imagine hunger plaguing the suburbs of America, but citizens living in cities like Houston, Detroit, and even sunny Fresno, California or Orlando, Florida worry about feeding their families every month. Surely these people are benefited by the genetically modified crops that are grown on every patch of land around them, right? Not really.

Strangely, people living in the heartland are surrounded by rows and rows of GMO corn stalks and soy-beans, roughly one sixth of all ‘staple’ crops grown for the entire country. Yet among billions of barrels of corn and soy, the US government had to pay more than $11 billion to subsidize those crops while Iowans go hungry.

Biotech told the world that GMOs would solve food insecurity problems, but as a rural farmer in Iowa, or a single mom raising four kids on a home-health worker’s salary in Texas will tell you – this just isn’t so.

Food insecurity has risen by 57% since GMOs were introduced in the United States. More and more people rely on the handouts given at church food pantries and non-profit food banks in order to survive. What’s more – they often eat poorly since many food pantries do not stock organic, healthful fruit and vegetables, and are often full of packaged convenience foods like GMO-containing Froot Loops cereal or MSG-laden soups. The strange irony is that the US government spent only $1.6 billion last year to subsidize what they call ‘specialty’ crops, which means fruit and vegetables.

Since 1995, $253.7 billion has been spent largely to subsidize just 4 crops – corn, cotton, wheat, and soybeans. GMO corn blows all other crop subsidies away: 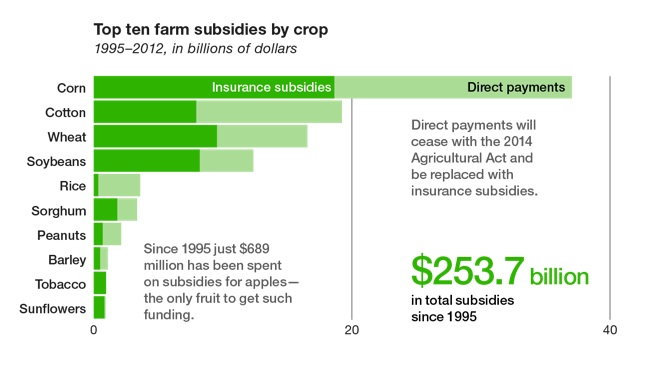 The introduction of genetically modified upland cotton, Bt corn (as well as other GMO strains), and soybeans has not eradicated hunger. It has induced hunger in America. With $253.7 billion in subsidies going primarily to grow GMO crops, we could have really been feeding America by teaching sustainable farming techniques and small scale organic gardening to those who are most food insecure. If the Russians can do it, so can we.

Truth: 8 Proofs We Don’t Need GMOs to Feed the World

According to research from the U.S. Department of Agriculture, it costs a family of four between $146 and $289 a week to eat a healthful diet. This cost is based on preparing all meals at home.

“We constantly hear the claim that you can’t eat healthy on a budget, and to us that’s a myth because a family can eat a healthy diet with fruits and vegetables that meets the Dietary Guidelines for Americans.”

But does Post account for the lack of real food even available to families across the US?

The Harvard Gazette points out that it can be much more costly to eat a healthful diet. It costs an average of $1.50 per day, per person to eat better. Lead author of the study pinpointing these costs, Mayuree Rao, a junior research fellow in the Department of Epidemiology at the Harvard School of Public Health, says:

“People often say that healthier foods are more expensive, and that such costs strongly limit better diet habits, but, until now, the scientific evidence for this idea has not been systematically evaluated, nor have the actual differences in cost been characterized.”

These additional costs, of course, are based on a food system that rewards the unhealthy biotech agricultural model, and neglects to foster sustainable food sources that are not only less expensive, but more nutritious. There are economical ways to grow food in our own backyards, yet these are not promoted, and definitely not utilized on a grand scale.

For example, you can find free mulch in many neighborhoods, and organic seeds can be exchanged among gardeners even in urban areas – for free. Consider that a single tomato plant can cost $1.50 and yield 12 hearty, organic tomatoes. A single non-GMO tomato purchased at Whole Foods can cost the same as the entire plant. Even food waste can be used to minimize costs by creating compost that feeds future crops and remineralizes the soil.

America has been programmed to purchase their food at large chain stores where there is little nutritious or filling instead of going out and picking dozens of different kinds of vegetables that grow with little or no maintenance and re-seed themselves year after year. Just like plants in a meadow just paces from their homes, or on their own urban balconies and rooftops.

Other places in the world utilize these small-scale organic gardens to feed masses of people, and do it successfully – without huge government subsidies, and without poisoning the genome and wrecking the soil for future generations.

Monsanto’s marketing strategy states: “Produce more. Conserve more. Improve lives.” But the biotech giant isn’t delivering on that promise. The US Department of Agriculture’s Economic Research Service (USDA-ERS) released a report on GMOs, which found no increase in yield potentials for genetically modified crops in the past fifteen years.

The report also stated that “yields of herbicide-tolerant or insect-resistant seeds may be occasionally lower than the yields of conventional varieties.”

Despite the astonishing land acreage used to grow these crops, 40% of US corn goes to fuel, and a majority of US soy is purchased by the animal feed industry.

The Union of Concerned Scientists has found that none of the genetically engineered crops increased intrinsic yields, and that both herbicide-tolerant corn and soy failed to increase operational yields. Yet GMOs continue to be heralded as the world’s food savior.

How then, are people suffering from hunger in the middle of America, where most GM crops are grown?