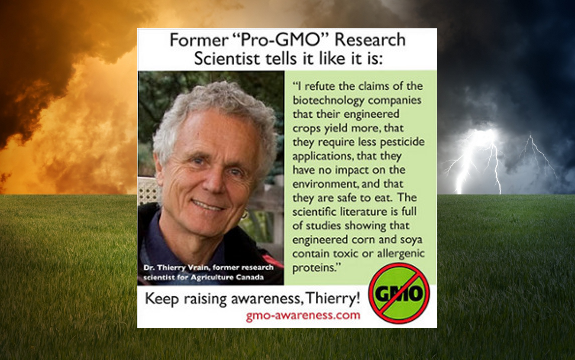 For how long will we need to go back and forth in this GMO battle before a sound conclusion is finally met? If you have been following the GMO debate at all, you probably realize that this issue will likely never rest, as numerous studies on both sides of the spectrum (one side showing safety and the other showing danger) will continue to surface. What’s more, this research as well as opinions will be born out of lies or false substantiation. You’ve likely read headlines like these lately and scoffed:

“I used to think that nothing rivaled the misinformation spewed by climate change skeptics and spinmeisters.

Then I started paying attention to how anti-GMO campaigners have distorted the science on genetically modified foods. You might be surprised at how successful they’ve been and who has helped them pull it off.”

Or if you trust one of the most hated companies on the planet, you can go straight to Monsanto’s site and read: An Overview of the Safety and Advantages of GM Foods.

Monsanto openly admits “after 30” whole “years of research” that they are convinced GMOs are safe. Just one type of pine tree lives more than 5000 years, but yea – Monsanto has all of Mother Nature figured out in its 30 years of tinkering with genes.

It’s amazing how many people have been boondoggled by biotech or are simply paid shills to keep the misinformation train choo-chooing along.

In comes Dr. Thierry Vrain, a former GMO biotechnologist who has come out with a lot of information that should open people’s eyes about the real dangers of genetically modified foods and crops.

Vrain will be the first to admit that Monsanto has conducted a lot of studies showing that GMOs are safe, but he changed his own tune about ten years ago when he started reading scientific journals from other countries.

“I started paying attention to the flow of published studies coming from Europe, some from prestigious labs and published in prestigious scientific journals, that questioned the impact and safety of engineered food.”

Vrain was so much a supporter of GMOs (as well as a former biotech scientist for Agriculture Canada) that he used to conduct tours and tell large groups of people all about the greatness of genetically altered crops – but not anymore. Here is what he thinks about his former industry now:

“I refute the claims of the biotechnology companies that their engineered crops yield more, that they require less pesticide applications, that they have no impact on the environment and of course that they are safe to eat.

There are a number of scientific studies that have been done for Monsanto by universities in the U.S., Canada, and abroad. Most of these studies are concerned with the field performance of the engineered crops, and of course they find GMOs safe for the environment and therefore safe to eat.”

Vrain thinks the public is being swindled. He believes we should all demand that government agencies replicate tests showing that GMOs are safe rather than rely on studies paid for by the biotech companies. He continues:

“The Bt corn and soya plants that are now everywhere in our environment are registered as insecticides. But are these insecticidal plants regulated and have their proteins been tested for safety? Not by the federal departments in charge of food safety, not in Canada and not in the U.S.

There are no long-term feeding studies performed in these countries to demonstrate the claims that engineered corn and soya are safe. All we have are scientific studies out of Europe and Russia, showing that rats fed engineered food die prematurely.

These studies show that proteins produced by engineered plants are different than what they should be. Inserting a gene in a genome using this technology can and does result in damaged proteins. The scientific literature is full of studies showing that engineered corn and soya contain toxic or allergenic proteins.”

This science is actually only about 40 years old. It is all based on a theory of genetic manipulation hypothesized around 70 years ago – of the ONE GENE – meaning that each gene codes for one single protein. The Human Genome project proved this totally wrong.

Most scientists now understand that any gene can give more than one protein and that inserting a gene anywhere in a plant eventually creates rogue proteins. Some of these proteins are obviously allergenic or toxic, like Cry proteins found in GMO corn. Otherwise known as Bt toxins (Bacillus thuringiensis), Cry proteins are one of biotech’s answers for ‘safe’ food.

That’s odd; one study found them absolutely toxic for mammalian blood. Dr. Mezzomo says that Cry toxins are deathly for mice. Another study linked them to a higher rate of leukemia. Yet another study conducted at Sherbrooke University Hospital in Quebec found corn’s Bt-toxin in the blood of pregnant women and their babies, as well as in non-pregnant women. These same toxins are also associated with higher levels of inflammation in the body, allergies, MS, and cancer.

Furthermore, what ridiculous egocentricity for biotech scientists to think they can crack the code of life when there are still acres and acres of rainforest that contain medicinal herbs that they have never even studied or recognized. Every square mile lost in these forests represents a possible cancer soution or super-food source.

Why the heck do we need GMOs? We haven’t even utilized the plethora of foods and herbs Mother Nature has already provided us with, if only we would steward them sustainably. There seems to be a new wonder-extract being discovered every few days, despite our pillaging.

Additionally, Vrain once answered honestly to this question in an interview:

“Q: It is astounding that people don’t question the very idea of altering DNA. When Monsanto or others claim a genetically modified organism is “substantially equivalent” to the conventional plant, it’s illogical to me because when DNA is altered, the plant is altered. It’s not the same and it’s certainly not natural.

A: That depends on your view of the world. As a scientist, when you add a bacteria gene to a plant, or a plant gene to a fish, or a human gene to corn, or 10,000 acres of corn growing insulin – they consider it progress. So if a tomato plant has a bacterial gene, it still looks very much like a tomato plant. You couldn’t tell very much from the taste of the tomato so there is something easy about believing in “substantial equivalence” . . . but Roundup (Monsanto’s herbicide) is a chelator; it holds manganese, magnesium and a few other minerals. It holds the minerals and doesn’t let go so basically it starves the plant. It probably also starves many other creatures in the soil.”

New evidence shows that these same important minerals are chelated from humans that eat RoundUp GMOs.

Vrain has based his research on over 500 government reports and scientific articles published in peer-reviewed journals, some of them with the highest recognition in the world.

Now tell me – how exactly are GMOs safe?

If a soil biologist and scientist of genetic engineering of 30 years revisits his stance on GMOs – shouldn’t those who are still clinging to biotech efficacy relent? We need more GMO whistleblowers like himself. I hope they are out there and they come forward – and fast.