Sheryl Crow says that her benign brain tumor may have been caused by cell phone use. Doctors found the tumor earlier this year after the singer, aged 50, began having difficulty remembering lyrics.

Crow reassured fans that the tumor is benign, but the latter remember her battle with breast cancer in 2006. What has puzzled many fans is that she attributes her tumor to excessive cell phone use, although no one should actually be surprised. “I [was] worried I had an early [onset] Alzheimer’s,” she told Katie Couric on her new show, Katie.

Public Left in the Dark About Radiation Dangers

“There are no doctors that will confirm that. [But] I do have the theory that it’s possible that it’s related to that,” she told Couric. “I [used to spend] hours on the old archaic cell phones.”

Industry and media have collectively perfected the art of keeping the greater public in the dark. In fact, Tawkon released a mobile app last year that estimates radiation levels produced by smart phones based on antennae strength, headset or speaker phone use, and baseline figures provided by manufacturers. But what did technology giant Apple do? Ban the app from its App Store. 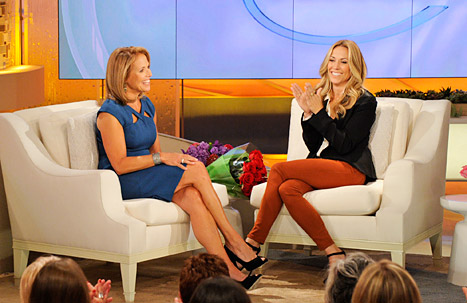 Studies on Cell Phones as Carcinogens

Meanwhile, research by Greek scientists shows that cell phone radiation changes vital proteins (up to 143) in the brain. Researchers found that 143 proteins in brain areas like the hippocampus, cerebellum, and frontal lobe were negatively impacted by radio frequency radiation over a period of 8 months. A total of 3 hours of cell phone exposure were simulated over the 8 month time period, and the results showed that many neural function related proteins’ functional relationship changed the for worse.

Just days ago, the Örebro Hospital in Sweden released their findings that 10 years of cell phone use resulted in a 290 percent increased risk of brain tumor development. The World Health Organization (WHO) has actually warned us all that cell phones are in the same category of carcinogens as lead, engine exhaust, and chloroform—a warning that fell largely on deaf ears in the US.

Cell phone radiation is especially harmful for fetal brains, and these effects may lead to behavioral disorders including ADHD in children. This is especially disconcerting when taking into consideration where many pregnant mothers place their cell phones when texting—on their swollen bellies.

How to Protect Yourself

To protect yourself from cell phone radiation, try the following: