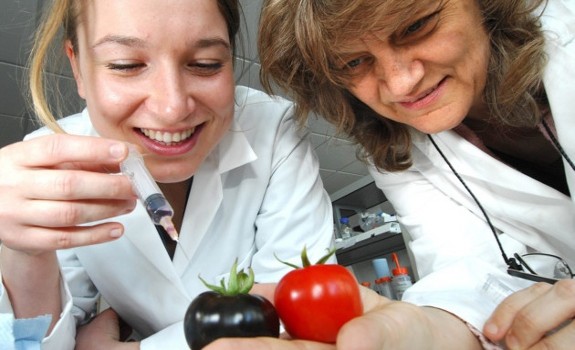 Biotech would like you to believe that their new purple GMO tomato is some kind of ‘cure’ all for cancer (even though several, non-patented natural plants already do this job) even though nothing of the sort has been proven. What’s worse, the scientific community is recruiting sick individuals to test their new poison food.

If you just examine the premise behind this first, before getting into the fake science offered by the U.K.’s John Innes Centre (JIC), you will observe some very evil bait and switch tactics offered by the Biotech industry. There is absolutely no proof that these tomatoes are cancer-‘curing’, and more likely, if we stand on evidence coming out about many other genetically modified foods, they are cancer-causing. What makes them believe we will actually take this latest bait?

On the way to creating this GMO ‘superfruit’, it seems biotech has merely superbugs (a fact that is well documented). GMOs have wiped out entire colonies of monarch butterflies and bees, caused lymphoma and gastrointestinal cancers, and killed human embryo cells with soy, corn, and other GM foods.

SustainablePulse reports that Professor Cathie Martin and her research team from JIC are eager to begin human trials of the largely untested GM fruit on heart patients in the U.K. This is after just one small-scale laboratory trial revealed that mice given an extract of the transgenic travesty lived about 40 days longer on average than other mice. Of course, we also have evidence that Monsanto and other GM companies have hidden lab results on much more extensive tests.

Spliced with genes from the antioxidant-rich snapdragon plant, GM purple tomatoes have been around since 2008, but the scientists are at it again, this time with the help of propaganda and mainstream media who first reported that these GM tomatoes might ‘cure’ cancer.

“These claims are not actually based on benefits seen in humans, but rather from a small-scale study of mice that were given an extract of genetically modified tomatoes,” “[T]he small sample sizes used mean the results may have occurred by chance. Also until the tomato is tested in humans we cannot be sure that it will offer the same benefits, or that there will not be any unexpected harms.”

So, the real question begging to be put forth is – why not just eat non-GMO tomatoes that are already full of anthocyanins – the anti-cancer antioxidant found in this and numerous other foods already? Besides, researchers in Brazil and Oregon have already developed non-GM tomato varieties with almost the exact same antioxidant and nutrient profiles as GM purple tomatoes.

“This is extraordinarily irresponsible and breaches medical ethics,” adds GMWatch.org, “If Martin and the JIC really are planning to rush ahead with human trials on sick people before doing basic animal toxicology testing, then they are putting patients at risk. Sadly this would be typical of the arrogant behaviour we have come to expect of pushers of this technology.”