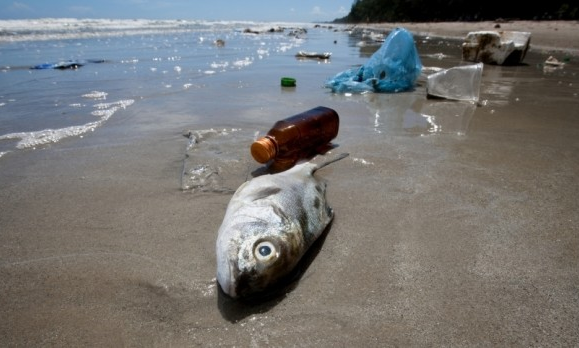 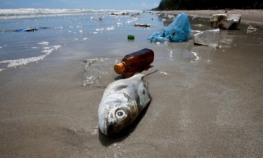 Fish and sea life are exposed to everything we put in the oceans and waterways. Normally, we talk about toxins like mercury and even oil. But a new study indicates plastics could be doing serious harm to the fish and ultimately the people who consume it.

“The ocean is basically a toilet bowl for all of our chemical pollutants and waste in general,” says one of the lead researchers Chelsea Rochman. “Eventually, we start to see those contaminants high up in the food chain, in seafood and wildlife.”

We already knew pollutants moved up the food chain, starting in the smallest life forms in the sea and getting more concentrated as it moved into the larger predators. This is why foods like tuna and swordfish tend to have the highest mercury and toxin levels. But the new study looked at how plastics affected this transfer of toxins.

They fed a fish called medaka three different diets: one of regular fish food, one of 10% plastics with no pollutants, and one with a diet of 10% plastics that had been soaking in the San Diego Bay. Perhaps unsurprisingly, the group with the dirty plastics had the highest levels of organic pollutants following the study period. They were also more likely to have tumors and liver problems.

“Plastics—when they end up in the ocean—are a sponge for chemicals already out there,” explained Rochman. “We found that when the plastic interacts with the juices in the [fish’s] stomach, the chemicals come off of plastic and are transferred into the bloodstream or tissue.”

We aren’t talking about the giant soda bottle that washes up on shore, though toxins likely leech out of it too. Instead, we are talking about tiny plastic particles that have degraded over time. With the ocean being a virtual dumping ground, there are plenty of these plastics to go around.

It’s estimated in the book Garbology that the weight of plastics being dumped or otherwise finding its way into the ocean each year is the equivalent of the weight of 40 aircraft carriers.

There is truly no way of knowing just how polluted the fish in your grocer’s case is. Generally, we suggest choosing wild caught fish over farmed fish. But obviously these wild fish are not without their own risks.