Will There be more Plastic than Fish in the Ocean by 2050?

Let's make it so this does NOT happen

The saying, “There’s plenty of fish in the sea” will be utter nonsense by 2050, scientists say, because plastic will dominate the oceans.

Use of plastic has increased 20-fold in the past half-century, and plastic production is expected to double over the next 2 decades and nearly quadruple over the next 50 years. Nearly 1/3 of all plastic packaging “escapes collection systems,” CNN Money reports.

Yearly, 8 million tons of plastic wind up in the world’s oceans, and experts estimate there is 165 million tons of it is in our oceans right now. Every minute of every day, we dump one garbage truck’s worth of plastic into the ocean. That’s projected to increase to 4 per minute by 2050, says a report released recently by the World Economic Forum (WEF) and the Ellen MacArthur Foundation (EMF).

About 70% of plastics are laid to rest either in the ocean or in landfills, and only 5% is effectively recycled.

“After a short first-use cycle, 95% of plastic packaging material value, or $80 to $120 billion annually, is lost to the economy,” the report says.

These plastics are either eaten by fish, or turned into a floating garbage patch.

Read: The Numbers on Plastic Bottles – What do Plastic Recycling Symbols Mean? 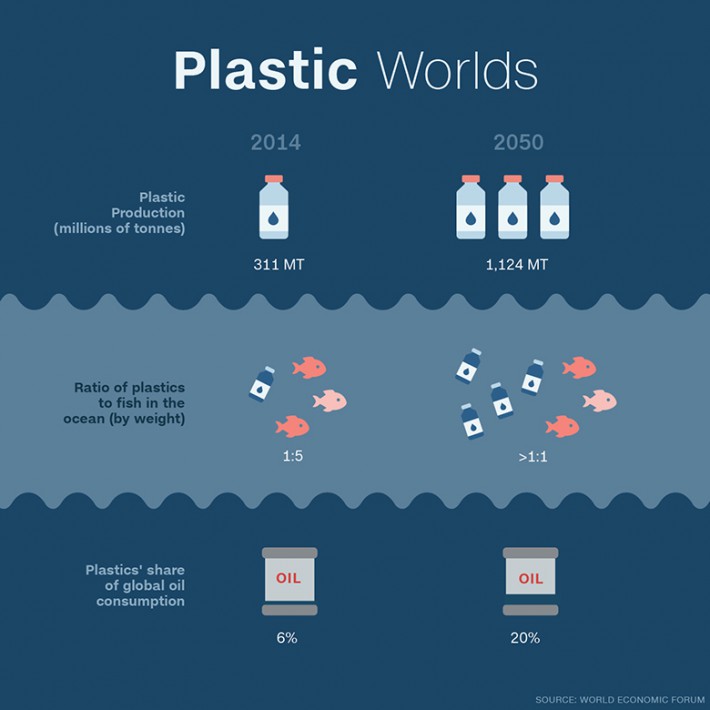 The WEF says the findings of the report are a good thing, because they might lead to more productive conversations about better solutions to the “plastic problem.”

The release of the report coincided with the WEF’s annual meeting in Davos, which was held January. Methods for tackling the impending crisis were discussed:

“To move from insight to large-scale action, it is clear that no one actor can work on this alone,” said Dominic Waughray from the WEF. “The public, private sector and civil society all need to mobilize to capture the opportunity of the new circular plastics economy.”]

The report states a “new plastics economy” is necessary to alleviate the problem. It would include more recycling, reusable packaging and composting plastic packaging.

Fortunately, steps are already being taken to protect our oceans and the Earth as a whole. In December, the U.S. Senate unanimously voted to phase out the use of plastic microbeads by 2017, which are found in many hand soaps, cleaning products and cosmetics.

Some independent entrepreneurs are busy developing alternatives to single-use packaging.

In case you were wondering, roughly 60% of the world’s plastics come from 5 countries: China, the Philippines, Thailand, Indonesia and Vietnam.