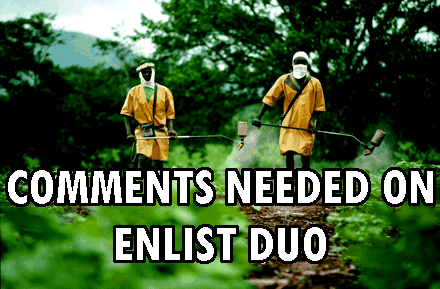 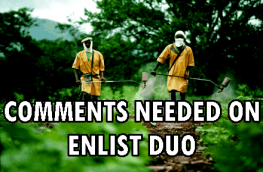 Welcome ‘Enlist Duo’ to the fabulous array of biotech wonders we can all enjoy. Dow’s latest obscenity, a new herbicide labeled ‘Enlist Duo,’ was just moved forward in its approval process. The US Environmental Protection Agency has now opened comments for a whopping 30 days before giving Dow’s latest form of poison free reign in the agricultural world. How fun for all of us, still reeling from Monsanto’s toxic concoction, RoundUp.

The illustrious Dow AgroScience has designed its new poison to be used with genetically engineered corn and soybeans to improve weed resistance. It will contain a combination of herbicides, including 2, 4-D and glyphosate, both of which are known to be poisons that kill human fetal tissue, cause neurological, gastrointestinal, and reproductive disorders, and a host of other health issues.

What a crock. Glyphosate has been linked to increased weeds, not weed-control, and disastrous poisoning of our ecological systems. 10-foot tall weeds, resistant to RoundUp (which contains, primarily glyphosate, but also other ‘inert’ chemicals which are equally, if not more toxic) are popping up on farms everywhere. RoundUp is turning out to be 125 more toxic than regulators first admitted, but we’re supposed to cheer on the approval of Dow’s latest filth even though it contains some of the very same ingredients?

The EPA and department of agriculture delayed approval for Dow’s Enlist Duo for a full year because they were inundated with requests for it to not see the light of day. The USDA decided in January, however, to grant approval to Dow and is prepared to do so in the next few months unless we all collectively act.

The EPA said it was also prepared to grant approval and would accept public comments for 30 days on its decision.

The EPA said it would impose “robust monitoring and reporting [requirements] to [the] EPA,” and that they could “take swift action to impose additional restrictions on the manufacturer and the use of the pesticide if resistance develops.”

Critics say that 2,4-D and other herbicides of its class have been independently associated with deadly immune system cancers, Parkinson’s disease, endocrine disruption, and reproductive problems.

“Biotechnology is taking agriculture backwards by facilitating a massive increase in use of this toxic herbicide, which formed part of Agent Orange used in Vietnam,” said Bill Freese, a science policy analyst at the Center for Food Safety, a non-profit group that has sought to block approval of the Enlist products.

PLEASE MAKE COMMENTS On The EPA Docket, HERE until May 30th, to stop Dow AgroSciences.