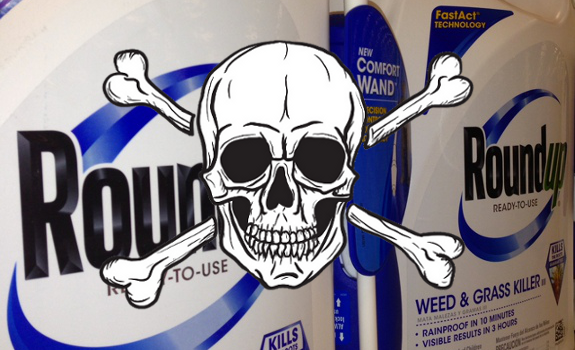 If someone opened up a bottle of arsenic, would you drink it? This is a ridiculous rhetorical question, but if you asked regulators – would you eat a chemical concoction that has been found to be 125 times more toxic than glyphosate, the main toxic ingredient found in Monsanto’s RoundUp herbicide? It seems an equally insane inquiry, but even after numerous highly alarming studies published in journal after journal questioning the validity of Monsanto’s claims that RoundUp is ‘safe,’ government agencies continue to allow the herbicide to be sprayed. Will this latest study be the one to break them from their poison-induced lunacy?

A new study just published in the journal Biomedical Research International reveals that despite the still reputation of agrochemicals being relatively harmless, formulations like Roundup herbicide are far more toxic than regulators have previously revealed. So – either they already knew this and refused to share it with the public, or some of them just had no idea how powerfully debilitating these chemicals could be when used together.

Many regulatory agencies administer tests to look at isolated chemicals to determine in what parts per million they become toxic to humans and the environment. Far too many chemicals are used than the agencies have the capability and funds to actually test for any length of time to determine their true interaction with other chemicals already in the environment. But this study goes even further, and determines that RoundUp – and its combined chemical ingredients – are 125 times more toxic than glyphosate alone.

Isolating a chemical completely loses the synergistic effect of the compound interactions that take place between multiple chemicals, and therefore does not give an accurate picture of what the chemical(s) can do. Any biologist or chemist could tell you this.

The study, titled “Major pesticides are more toxic to human cells than their declared active principles,” looks at the ‘inert’ chemicals, or the adjuvants, in 9 major chemical groups that are used globally in agricultural practices due to Big Ag monopolies: 3 herbicides, 3 insecticides, and 3 fungicides.

The study details how Big Ag deceives the public about the true toxicity of these chemical formulations using semantics. By focusing on only one chemical at a time, they can ‘isolate’ the results and claim that they are ‘safe’. This, even though in isolation, a chemical like glyphosate is already toxic in the parts-per-trillion range. You can imagine what happens when other toxic chemicals are then added to the mixture.

If you’ve ever made a batch of cookies, you can understand what happens to a recipe if just one thing is slightly off, or you add too much of one thing, or not enough of another. Instead of a delicious batch of chocolate chip cookies, you can end up with dough that can bounce, or concrete-hard cookies that no one would want to eat. Apply these same principles to herbicides, pesticides, and fungicides, and you get the idea – only we aren’t dealing with benign ingredients like eggs and organic flour. We are talking about highly volatile, toxic elements.

As the paper details, it isn’t one ‘active principal’ which is poisoning us, it is a complex formulation that is killing us all at a level determined ‘an acceptable level of harm’ based on the FDA’s ridiculous daily-intake levels:

“Pesticides are used throughout the world as mixtures called formulations. They contain adjuvants, which are often kept confidential and are called inerts by the manufacturing companies, plus a declared active principle (AP), which is the only one tested in the longest toxicological regulatory tests performed on mammals. This allows the calculation of the acceptable daily intake (ADI)—the level of exposure that is claimed to be safe for humans over the long term—and justifies the presence of residues of these pesticides at “admissible” levels in the environment and organisms. Only the AP and one metabolite are used as markers, but this does not exclude the presence of adjuvants, which are cell penetrants.”

Furthermore, researchers found that the chemical adjuvants can make a single chemical 10,000 times more toxic than the chemical alone. So maybe you could be exposed to glyphosate by itself and be fine after 100 exposures as a farmers, but when you add everything together, you are playing dodge ball with disease. The secondary side effects that overshadow the main ingredient cannot be overlooked.

Dr. Kelly Brogan, MD commented on this phenomena in connection with the study recently on her blog:

“Similar to the non-placebo-controlled trials on vaccines, adjuvants and preservatives are considered innocent bystanders in the consideration of risk profile.” According to Dr. Brogan, an understanding of toxicant synergy has exploded the simplistic supposition that “the dose makes the poison.”

If regulators don’t do something about this now, all we can do is assume that they meant for this to happen. Killing people by the millions with chemical warfare isn’t a new game. It’s been around for ages, but it stops. . .NOW.