Brief History: Monsanto Has Been A Merchant of Death for Decades 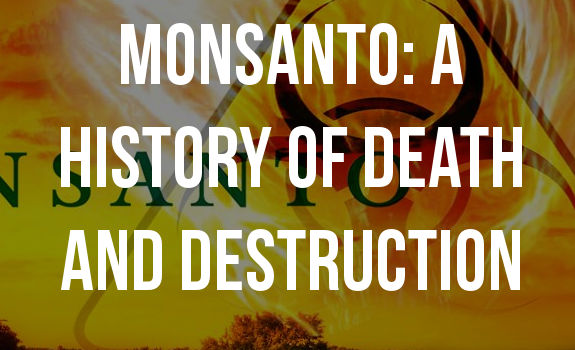 When you think of Monsanto, you likely think of genetically modified foods and corporate greed. You may think of this powerful corporation as today’s international super-villain, one that puts profits before people and doesn’t think twice of feeding poison to the masses. But Monsanto’s tale of destruction is far from new. As a matter of fact, Monsanto has been harming people for decades—at least since the Vietnam War.

Agent Orange is an herbicide and defoliant; this simply means it causes a plant’s leaves to fall off or kills vegetation altogether. Like most of Monsanto’s activities, the use of Agent Orange was loosely justified—it was sprayed across Vietnam during the war to eliminate the dense vegetation the Viet Cong was using for cover. But like genetically modified foods, the consequences weren’t weighed—or they were simply ignored.

An estimated potential 366 kilograms of Agent Orange was sprayed across over 6.5 million acres of Vietnam.

The effects on the Vietnamese people (and foreign soldiers) was quick. But it was also long-lasting. The Vietnam Association for Victims of Agent Orange/ Dioxin (VAVA) estimates more than 3 million people are still suffering the effects of exposure today. Just last year a baby was born exhibiting symptoms of Agent Orange exposure, four generations after the fact. That’s in addition to the 400,000 people  killed or maimed from Agent Orange, and 500,000 or so children born with birth defects as a result of exposure.

The cancer-causing chemicals weren’t only sprayed into the air– where they could easily pollute food and water sources, as well as be inhaled—they were also carelessly transported. Near Da Nang International Airport, which was the largest base for U.S. military aircraft during the war, the poisons leaked from containers and planes. In 2009 researchers found areas near the airport where a gram of soil contained 20,000 picograms of dioxin—about 20 times the environmental standard in both Japan and Vietnam.

The clean-up that has taken place over the last 50 years has been significant. From replanting trees and establishing reserves to allow vegetation to return, the process has been slow. In addition, the health effects have not gone away.

Make no mistake, Monsanto (and the U.S. government) are the culprits here. Once again, throwing caution to the wind without giving a thought to long-term effects. The company is concerned with their bottom line. Justification for their actions may sound good, i.e. ending world hunger, but are not backed with hard data. On the contrary, the data shows their products to be far more harmful than helpful and their track record is similarly damning.

11 responses to “Brief History: Monsanto Has Been A Merchant of Death for Decades”