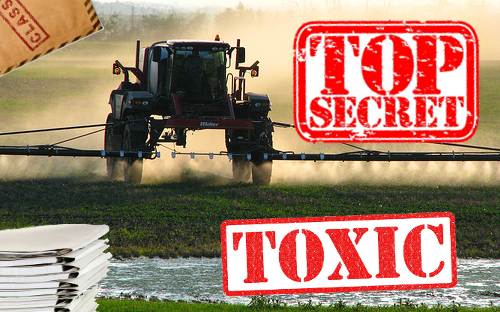 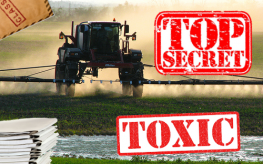 Talking about Monsanto’s latest attempt to obstruct justice, halt transparency, and prevent people from stopping their seed and herbicide businesses from spreading is starting to seem redundant, but the company just keeps acting in increasingly objectionable ways. Now, the company is refusing to release to the public lab tests conducted in St. Louis, Missouri, which gave them authority to use glyphosate in China.

Just months ago, Chinese food safety volunteers tendered a request to China’s Ministry of Agriculture to release the study that justified issuing the safety certificate for the import into China of Monsanto’s glyphosate-based herbicide RoundUp. Glyphosate was given a safety certificate in 1988 after studies submitted by Monsanto were conducted at Younger Laboratories in St. Louis Missouri.

The test was meant to be an acute exposure toxicity test in which rats were given RoundUp by mouth for several days, and rabbits were exposed to RoundUp by skin. The company claims that the herbicide had no effect on the eyes or the skin, and that no allergies ensued. However, they are refusing to release the lab report to China’s food safety volunteers, stating that it is an ‘industry secret.’

The study results have never been disclosed anywhere in the world, and Monsanto refuses to disclose the results now. If there truly were no adverse effects from rabbits and rats being exposed to glyphosate, then why not absolve themselves from public scrutiny, and post them for all to see? I think we know the answer to that question. If animals simply feeding on glyphosate-resistant GMO corn, soy, and other crops developed tumors, then what would have happened to rats who ate the stuff straight from droppers?

Read: The Netherlands Says NO to Glyphosate, Monsanto’s RoundUp

Furthermore, why would China give Monsanto permission to export RoundUp into their country based on toxicity tests that only lasted a few days?

Meanwhile, additional toxicity tests conducted on glyphosate – the main ingredient in RoundUp  – have been conducted in Europe, and by the Brussels-based advisor to NGOs on toxicity and risk assessment issues, Tony Tweedale has asked the European Food Safety Authority (EFSA) to disclose two more of these studies to the general public. One was a test by German regulatory agencies in which they measured an ‘Acceptable Daily Intake’ (ADI) of the chemical, and another measured chronic toxicity based on exposure.

Germany had recommended revising the ADI upwards from 0.3 mg to 0.5 mg per kg of body weight per day, but we still aren’t certain there is any safe level of glyphosate exposure, since the toxin bioaccumulates in the body and also interacts with other pesticides and herbicides to cause severe health problems. Even the EPA admits this can be a problem.

As DDT, for example, moves through the food chain, we are exposed to ever-increasing levels of the poison, and this goes for other pesticides, fungicides, and herbicides used in agriculture too. These substances aren’t just in the GMO plants we eat, but also in secondary consumers like livestock, fish, and birds.

Despite Tweedale’s requests, the European Food Safety Authority has also refused to release their toxicity studies on Monsanto’s RoundUp, stating that they contain commercially confidential information.

It seems our government agencies around the world will do nothing but continue to protect the world’s most hated corporation, while hiding the true toxicity levels of their best selling product from the people.