Soybean fields in parts of Arkansas, Missouri, and Tennessee are plagued by “superweeds” that have become resistant to glyphosate, the main ingredient in biotech company’s Monsanto’s RoundUp herbicide. Farmers are now dousing the plants with illegal chemicals to try and kill the rogue weeds.

The Root of the Problem

When agritech giant Monsanto rolled out its “RoundUp Ready” GMO seeds, the mammoth corporation made farmers a promise: the new crop system would allow them to use less chemicals on their crops.

The worrisome weeds would surely die, Monsanto said, but the RoundUp Ready plants would withstand the chemicals and thrive, producing greater yields. Yup, farmers were told RoundUp was all they would ever need.

This promise has led to a more than tenfold increase in RoundUp use in the past decade, and a lot of the weeds aren’t having it anymore. They’re stronger than glyphosate now, stronger than Monsanto’s promise, and stronger than the American farmer’s best efforts. [1]

But if you don’t strangle the weeds to death, they’ll strangle crops to death. Something has to be done. That “something” involves growers illegally spraying a powerful herbicide that is damaging hundreds of thousands of crops in the aforementioned states.

Regulators, farmers, and academics alike are pointing their fingers at Monsanto’s introduction this year of a new variety of genetically modified soybean.

The new mutant soybean was designed to resist not just glyphosate, but also the dicamba herbicide, which has been used for decades. [2]

The Road to Hell was Supposedly Paved with Good Intentions

The thinking behind “Xtend,” the new version of the herbicide-tolerant soybeans, was that it would give farmers the option of also spraying dicamba. This, Monsanto believed, would kill off the weeds that RoundUp couldn’t touch.

The problem with dicamba is that it’s known for evaporating quickly and drifting into neighboring fields. What’s more, ridiculously small amounts of the chemical can wreak havoc on soybeans.

Monsanto sold farmers the new biotech soybean seeds before the company could provide an updated version of dicamba, one that was designed not to drift. [3] [2]

The new dicamba, you see, is still awaiting approval from the Environmental Protection Agency (EPA). When and if it gains approval, the agency may impose restrictions on how and when the chemical may be used.

Monsanto didn’t care that it was unapproved, and it wasn’t going to sit around waiting on the silly government to give it the go-ahead. It went ahead and started selling its dicamba-resistant soybeans anyway, handing farmers a new weed-killing tool that wasn’t approved yet.

According to Philip Miller, vice president of global regulatory affairs for Monsanto, the company “took quite a bit of effort” instructing farmers and pesticide dealers to avoid spraying older versions of dicamba over the new biotech fields and, for the most part, the farmers have complied.

Those that haven’t are likely breaking the law out of desperation. 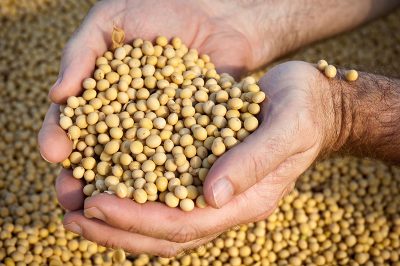 Barber said this threat only adds to the farmers’ frustration:

Farmers have always had to contend with drifting, but Bob Scott, a weed specialist at the University of Arkansas, said he’s never seen it this bad before:

“This is a unique situation that Monsanto created.”

Farmers whose fields have been damaged are especially angry, said Tom Barber, another scientist at the University of Arkansas who studies weeds, and rightly so. They’re already struggling financially due to low crop prices. Barber explained:

“They see their soybeans out there all cupped up and stunted, their reaction is not good.

We’ve seen cases of herbicide drift before. Usually the farmers work it out among themselves. But it’s getting to the point now, it’s made a lot of farmers upset with their neighbors. It’s an unfortunate thing.”

In Missouri, more than 1,000 farmers have filed formal complaints with the state’s Department of Agriculture. In Arkansas, 25 complaints have been filed. If the department determines that a farmer has sprayed dicamba illegally, the farmer can be fined.

In Arkansas, fines can reach $1,000. State regulators are considering raising the maximum fine to $5,000 because the lower fines aren’t stopping farmers from spraying dicamba.

Even if the EPA approves the use of Monsanto’s reformulated version, the Arkansas Plant Board may implement new regulations that could drastically restrict the use of dicamba.

There is also evidence that Monsanto’s new glyphosate-dicamba mixture might not work for very long. Recent research suggests that weeds may evolve to resist dicamba over just 3 years.

Of course, Monsanto and other chemical companies like Dow have vowed to create other, new toxic mixtures and crops designed to withstand them. [4]