Is it in a city near you?

At this point, we have all been exposed to Monsanto’s toxic glyphosate – the chemical in Monsanto’s best-selling herbicide, Round Up. Exposure is happening either by eating GMO foods, or living close to a farm that routinely sprays their crops with the ‘probably-carcinogenic’ herbicide, as declared by the WHO’s IARC. In response to this, McDivitt Law Firm is inviting the public to attend a series of town meetings to hold agrichemical companies liable for the health damage they have caused with Round Up chemicals. Are they meeting in your town?

The world authority on cancer, the International Agency for Research on Cancer (IARC) of the World Health Organization (WHO), declared the herbicide glyphosate to be ‘probably carcinogenic to humans’ in its latest expert assessment. The IARC is composed of 17 experts from 11 countries who met at IARC headquarters from 3-10 March 2015 in Lyon, France.

The meeting followed almost a year preparation, including a comprehensive review of the latest available scientific evidence. The experts were selected on the basis of their expertise and most importantly, the absence of real or apparent conflicts of interest. They found glyphosate to be highly toxic. 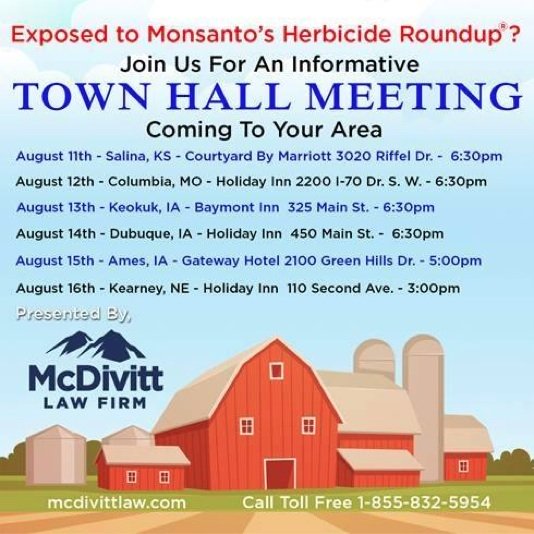 Informational Town Hall Meetings will be held by McDivitt Law firm throughout August to discuss the issue of glyphosate’s toxicity and its effects on human health. You can view the image above to find out if they are visiting your town, or call and request that they visit your town if you know there is enough interest to add yours to the list.

Specifically, they are interested in providing information to individuals who have been exposed to glyphosate-based herbicides and have health problems as a result of the exposure.