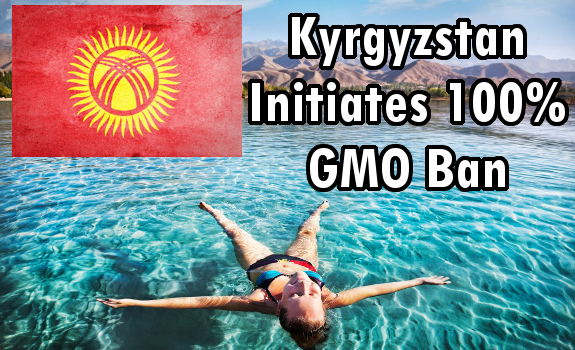 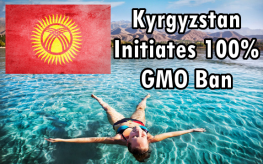 This past Wednesday a nation bordering China and South of Kazakhstan, Kyrgyzstan, decided to become one of the first countries in the world to ban all GMO crops as well as the sale and importation of genetically modified organisms. This means that roughly 5,500,000 inhabitants of this country can enjoy better reproductive, cellular, and digestive health while the environment evades millions more pounds of pesticides.

Joining the trend of other Asian countries to ban GMOs, with China’s recent refusal of 8 different shipments of GMO corn and the nation of Bhutan also going 100% organic, the tide seems to be turning for Monsanto and biotech monopolies who would push herbicide-‘resistant’ seed on the world.

The Kyrgyz Members of Parliament approved the third reading of the bill: ‘On the prohibition of cultivation, production, import and sale in Kyrgyzstan of products containing GMOs’. Food grown within the borders of the country as well as food being imported will be checked for GMO, and all genetically modified food will be refused or destroyed. The Ministry of Economy mentioned that it would be difficult to police GMO products, but not impossible.

To police for GMOs, there is reportedly to be a GMO testing laboratory built before 2015, where not only food coming from abroad, but also food grown in the country will be checked for GMO contamination. The Ministry of Economy noted that to prohibit the importation of GMO products on the ground will be difficult but possible.

The bill is to be finalized after President Almazbek Atambayev pens his signature.

Only 7% of the land in Kyrgyzstan is utilized to grow crops, with 45% being utilized to support pasture for livestock, but this is still an important message to send to the biotech industry which seems adamant on pushing poison food on the world against its will. Tobacco and cotton are two main industries in Kyrgyzstan, but if GMO corn, soy, and sugar beets can be prohibited effectively, then this country is still ahead of the game, even with its production of tobacco – since this crop is shrinking every year. The country also plans to ban tobacco and alcohol advertisers as well.