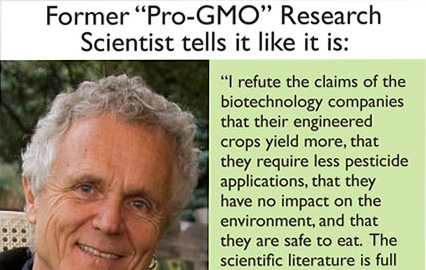 As mounting evidence shows genetically modified foods have dangerous health and environmental repercussions, the number of scientists willing to step forward and speak out against them is similarly growing. Dr. Thierry Vrain is just the latest of many scientists to buck Monsanto and their hired goons, changing his stance on GMOs and shouting their dangers to anyone that will listen.

Dr. Vrain is a former research scientist for Agriculture Canada. It was his job as scientist of his institute to address the public and others, assuring them of the safety of genetically engineered crops and foods. Now, 10 years after his retirement, he’s changed his tune.

“In the last 10 years I have changed my position. I started paying attention to the flow of published studies coming from Europe, some from prestigious labs and published in prestigious scientific journals, that questioned the impact and safety of engineered food.

I refute the claims of the biotechnology companies that their engineered crops yield more, that they require less pesticide applications, that they have no impact on the environment and of course that they are safe to eat.”

The studies commissioned by Monsanto understandably come to the conclusion that genetically modified foods and crops are both safe for the environment and safe for people. They are commissioned by the people who want that outcome. Studies from objective researchers, however, often come to very different conclusions.

Vrain says we should take these studies seriously and demand that our governments replicate the studies rather than take the word of biotech giants like Monsanto.

“The Bt corn and soya plants that are now everywhere in our environment are registered as insecticides. But are these insecticidal plants regulated and have their proteins been tested for safety? Not by the federal departments in charge of food safety, not in Canada and not in the U.S.”

Long-term feeding studies on these foods simply don’t exist. We do, however, have studies that indicate disastrous outcomes in rats, where animals fed genetically engineered foods die prematurely.

Vrain argues that the entire paradigm of genetic engineering being used in GMO technology is flawed and based on a misunderstanding.

“Genetic engineering is 40 years old. It is based on the naive understanding of the genome based on the One Gene – one protein hypothesis of 70 years ago, that each gene codes for a single protein. The Human Genome project completed in 2002 showed that this hypothesis is wrong.”

It’s this single misunderstanding, compounded with greed, that has created plants that could be toxic to our health.

As researchers like Dr. Vrain come forward to voice their opposition to genetically modified foods, we can hope governments and consumers alike will pay attention and demand accountability from corporations like Monsanto.