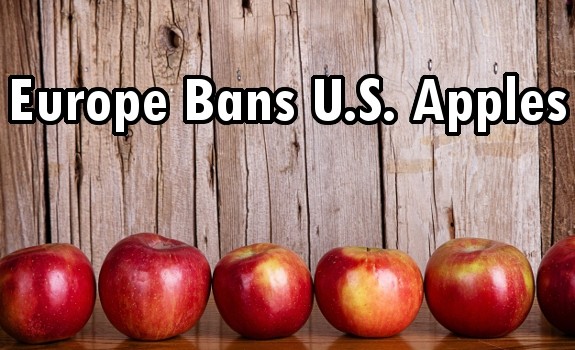 It’s sad when one of the biggest ‘super powers’ can’t even export a quintessentially American food to another country because it is too toxic to eat. But apples treated with diphenylamine (DPA), a substance which keeps them from turning brown for months at a time when they are kept in storage, is now a sore spot for importers of American apples.

DPA isn’t harmful all by itself, but it breaks down into carcinogogenic elements. It’s been used since 1962, but was banned in the European Union in 2012 since producers couldn’t answer inquiries about its safety. European food safety regulators wanted more information on it, but none could be summoned. The apple industry simply responded with one study “that detected three unknown chemicals on DPA-treated apples, but it could not determine if any of these chemicals, apparently formed when the DPA broke down, were nitrosamines.”

British scientists, John Barnes and Peter Magee, in 1956, reported that dimethylnitrosamine produced liver tumors in rats, and later went on to test other nitrosamines and N-nitroso compounds. They found that the compounds caused all kinds of problems, including liver cancer, lung cancer, and even botulism.

No wonder European officials were concerned. In 2012, they slashed the allowable levels of DPA on apples to 0.1 parts per million, but now they don’t want those gleaming, spot-free apples normally seen on super market shelves in the States, at all. DPA residues were found on over 80 samples taken from US imports, with an average reading of 0.42 parts per million, well above their ‘allowable’ level.

Funny then, how the U.S. EPA Office of Pesticides tasked with reviewing all pesticides and chemicals on our agricultural produce told the EWG that they had no idea their was a ban on DPA. The EPA then had the nerve to tell the EWG that they had no intention of reviewing DPA safety standards, in light of European’s refusal to eat our poisoned fruit.

Reminds you of the Snow White fairy tale, doesn’t it. Here, little lady, eat the fruit. The Europeans said no thanks, and the rest of us would be better off getting our apples from a bunch of cutely named dwarves.