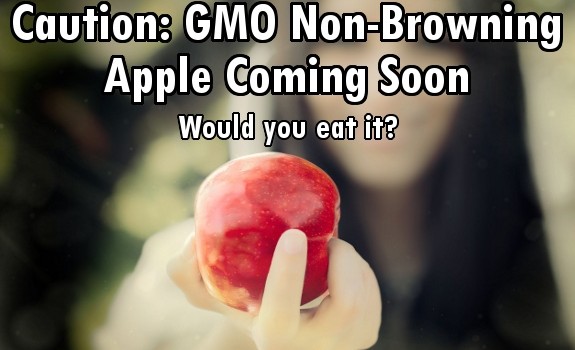 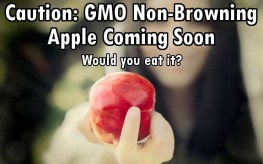 Like the decrepit hand of a wicked witch offering us all a shiny red apple, the latest GMO project puts a new poison in one of our favorite fruits.  This time, it is Neal Carter, inventor of Okanagan Specialty Fruits (OSF) offering the latest genetically modified atrocity, named the Arctic Apple. The company will offer its first non-browning apple through the ‘wonders of modern science,’ but I’m not sure its safe to take a bite.

Carter is the inventor of this GMO freak show – and this time it isn’t Eve that will give man his apple – it’s the biotech industry at it again with a way to reduce a genetic ‘issue’ in apples – the oxidation of the fruit which causes it to brown when it has been exposed to air. The British Columbia based company says this is a serious problem which causes a loss for the industry at every level of the supply chain on their website.

Furthermore, the GMO fruit won’t “exhibit slicing damage, result in shrinkage, and put more money in grower’s pockets,” according to OSF, but that’s only if the public takes the bait.

Okanagan Specialty Fruits also claims that GMO foods are highly regulated, naming Health Canada and the US FDA as sources of responsibility for food safety. But most of us already know that the FDA rubber stamps genetically altered foods without really paying attention to the concerns of scientists who show that genetic alterations could be harmful to human beings – preferring to give biotech corporations carte blanche when it comes to destroying human health.

The FDA outright lies to consumers about GMO foods. Monsanto and GMO growers spent more than $40 million recently to keep our food from being labeled in California, and more illegally in Washington for the same reason. Wouldn’t you want to know if you were eating a ‘real’ apple or a poison one?

The problem with not labeling GMO foods is explained by Dr. Martha Herbert, a Harvard Professor:

“Tracing health problems to genetically engineered foods is almost impossible right now, because these foods are not labeled and there is no way to keep track of them. So there is no scientific basis at this time for saying that these foods are problem-free [link added].”

The FDA isn’t the only one who lies, either. Back in 1990, Monsanto even said, “Food labeling has Monsanto’s full backing.” More like, Monsanto will twist the truth at every juncture, just like the politicians that support the biotech farce.

Many places in Europe already support the labeling of GMO foods, but there is another layer of evil to contend with in GMO food creation. If genetically modified apples mix with an organic apple orchard, which is inevitable since you can’t control bees, butterflies, and wind, then all we will have to eat is the fatal GMO variety. The USDA even considers GMO contamination completely normal.  Biotech doesn’t need a fairy tale to put us all to sleep – it’s crafting the fruit to put us all in our graves surreptitiously.

51 responses to “Caution: GMO Non-Browning ‘Arctic Apple’ Coming Soon – Would You Eat It?”