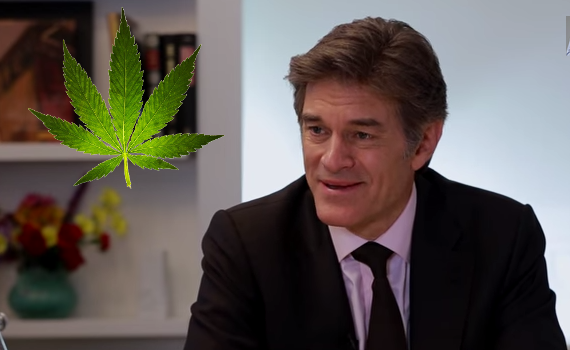 By Christina Sarich
Another celebrity doctor with a prime time television show has changed his tune about pot. Dr. Mehmet Oz has admitted in an interview just aired on Larry King Live that like most of America, he grew up believing the hype which demonized marijuana, but now he understands it has tremendous medical benefits.

You can see the clip above of Dr. Oz voicing his opinion of marijuana. He says we shouldn’t ‘perverse it’s use’ and he doesn’t condone it being used by kids, but perhaps he will even change his mind about that considering that many of the active compounds in cannabis are often used in cannabis oil and other products which don’t make you ‘high’ at all. He also warns that recreational use can create a dependence that is unhealthy in any setting, but he thinks it should be ‘widely available in America.’

Dr. Oz also points out that in his state of New Jersey, he is allowed to prescribe medicinal marijuana, but he isn’t allowed to purchase it. He jokes, “ . . .you have to break the law to follow your doctor’s orders.”

Another expert, molecular biologist Christina Sanchez, explains that THC found in medical marijuana can kill cancer cells completely. Is this why federal regulators won’t delist marijuana from its current standing as a Schedule I drug from the Controlled Substances Act? Why can’t individual states decide whether or not they want to legalize marijuana without the fear of Federal prosecution? 18 members of Congress have asked President Obama to remove marijuana as a Schedule I drug in an open letter, but still the Feds make no move to give citizens access to a plant that can treat them from multiple diseases.

We need more people like Dr. Oz, and others in highly-visible positions to argue for legalization and delisting from Schedule I. Even Fox news, an arm of mainstream mafia, has posted an article titled, “Survey: 53% of Doctors Support National Legalization of Medical Marijuana.” What are they waiting for?