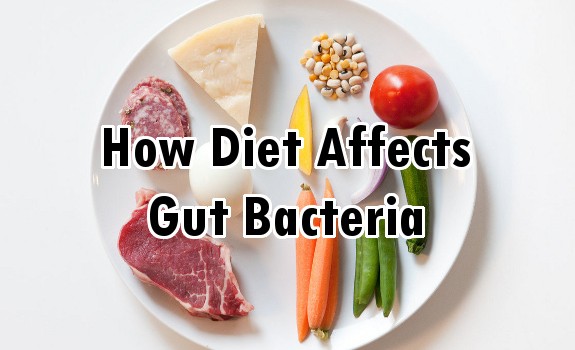 Everything we eat affects our health in some way. In the short-term, our foods travel to our stomachs and through our intestines, impacting the beneficial bacteria there in chemical reactions that take place nearly instantly. One recent study from researchers at Harvard indicates a diet rich in animal products may be doing the most damage to our internal ecosystem.

Published in the journal Nature, the researchers looked at how diet influences the balance of gut bacteria, or the “microbiome” within. They found that short-term consumption changes have profound effects. In particular, a diet with little plant foods and heavy on meat and dairy increased the abundance of certain microorganisms, one of which—Bilophila—is linked to digestive ailments and inflammatory bowel disease.

“Long-term dietary intake influences the structure and activity of the trillions of microorganisms residing in the human gut, but it remains unclear how rapidly and reproducibly the human gut microbiome responds to short-term macronutrient change…Finally, increases in the abundance and activity of Bilophila wadsworthia on the animal-based diet support a link between dietary fat, bile acids and the outgrowth of microorganisms capable of triggering inflammatory bowel disease. In concert, these results demonstrate that the gut microbiome can rapidly respond to altered diet, potentially facilitating the diversity of human dietary lifestyles.”

The study participants went on two “extreme diets” for a period of five days each. The first was all animal protein, with things like ribs and brisket for lunch and salami and prosciutto with a cheese tray for dinner. The second included meals of jasmine rice, onions, tomatoes, squash, peas, and lentils. Their microbiomes were analyzed before, during, and after each diet. For the animal-product diet, the effects were immediately apparent.

Microbes that love bile started to “dominate” the microbiome within days. Bilophila, these bile-loving bacteria, are linked to inflammation, colitis, and inflammatory bowel disease. Scientists stop short of calling Bilophila a “bad” bacteria as the explanation is more complex than that.

“These bacteria are members of a community that have lived in harmony with us for thousands of years,” says Dr. Purna Kashyap of the Mayo Clinic. “You can’t just pick out one member of this whole team and say it’s bad. Most bacteria in the gut are here for our benefit, but given the right environment, they can turn on us and cause disease.”

Still, the evidence suggests a diet rich in plants can provide the balance needed for a healthy gut. Perhaps those who suffer from digestive problems would benefit from reducing or eliminating animal proteins.

“I mean, I love meat,” said Lawrence David, a microbiologist who contributed to the work. “But I will say that I definitely feel a lot more guilty ordering a hamburger…since doing this work.”