Daily Toxin Intake: Just How Many Toxins Are You Accumulating? 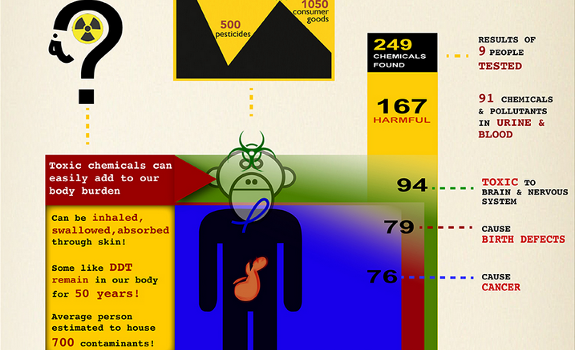 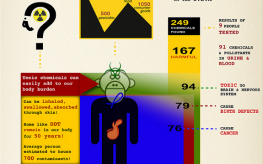 There are chemicals in our food, our water, the air we breathe, the clothing we wear, the carpet we walk on, and the plastics that surround us. In all honesty, the term “chemical” could apply to nearly any compound, but we aren’t talking about the benign harmless ones. Instead, we are talking about the toxins that we come in contact with and absorb each and every day. But just how much toxic exposure do really endure daily?

A new infographic called the Chemical Ape  discussed just some of these chemicals and the impact they have. The United States in all its twisted glory is likely the most toxic with an estimated 70,000 such chemicals in commercial use, many of which are untested on humans so we don’t even know the effects.

Modest estimates have suggested that we are exposed to more than 700,000 different toxic chemicals on a daily basis, and this doesn’t include the crazy poisons that GMO companies are pumping into the food supply. According to GlobalHealingCenter, it isn’t abnormal to be exposed to 2,100,000 toxins each and every day.

Read: 7 Methods for Detoxing and Cleansing Your Body

Even research from the University of California shows how the average person is being exposed to cancerous levels of toxins like arsenic, dioxins, and DDE. These toxins aren’t only made available to our body, organs, blood, and cells when we eat and drink them, but also when we breathe them or simply come in contact with them.

“10 seconds of touching a receipt, or quickly crumpling the paper up, releases obesogens into your body. Enough receipts and you’re much likelier to be fat.”

While not touching receipts is an extreme idea for weight loss (not to mention you’d likely have to touch a lot of receipts to make you fat), it’s good to know that these contaminants are everywhere, and in many cases, unavoidable.

And while the body does what it can to eliminate these toxins, some of them are known to remain in us for 50 years (DDT). To steer clear of all chemicals is a little like steering clear of bad smells, you will come in contact with them. However, knowing where they are and being prepared can help.

Your diet can minimize the impact of these toxins on your body. It can also help your body eliminate them. Detoxing from contaminants can be aided with foods like:

You can also take a detox bath, get regular exercise, and use a sauna to aid in the detox process.

4 responses to “Daily Toxin Intake: Just How Many Toxins Are You Accumulating?”