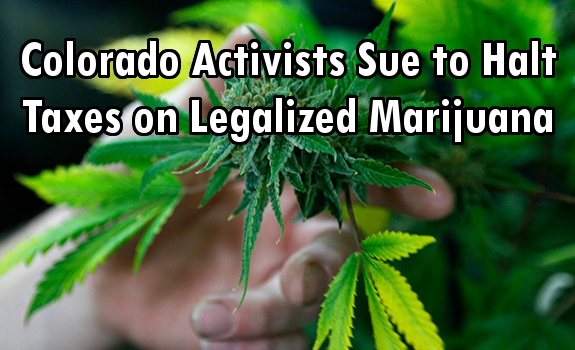 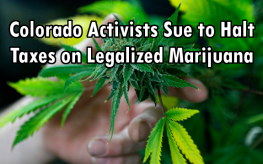 A Colorado attorney, Rob Corry has sued the Denver District Court stating that Colorado’s tax system violates the 5th amendment, protecting individuals from self-incrimination, and violating the US Constitution. He, and other activists feel that the exorbitant taxes on marijuana legalized just barely a year ago in the state are antagonistic to the main reasons for legalizing marijuana in the first place.

Corry puts forth that when marijuana growers and sellers pay taxes on marijuana sales, they incriminate themselves under federal law, which still bans marijuana and has it classified as a Schedule I drug in company with heroine and cocaine. Though President Obama has promised not to pursue federal action against states that legalize cannabis, the issue remains querulous for states that are considering legalization.

“It’s pretty clear that the black market [was] never going to go away with these taxes,” said Corry, who is seeking a preliminary injunction to block the state from collecting tax on pot as part of his case. He believes, as others do, that the heavy pot taxes undermine the goal of legalization. If the injunction is denied, he will tell pot shops to refuse to pay taxes, but this would likely incite state officials to suspend their licenses to sell.

Both supporters of Corry’s case and opponents agree that the case threatens the entire state-sanctioned industry, and not just the shops which Corry currently represents. Once again, the struggle between state and federal law is in question, and the lawsuit, a 40-page complaint, argues that the federal law is supreme over state’s rights. If that interpretation were strictly followed, Colorado’s own courts could question selling pot ‘illegally’.

“In my mind overtaxation is just as bad as prohibition,” Corry told 9NEWS.

Other pro-marijuana attorneys are concerned about the ramifications across the nation, not just in Colorado.

“It is a bit of a reckless argument,” said Brian Vicente, a prominent lawyer on marijuana issues. “There’s a small chance that a judge may decide to follow through on the supremacy clause and question the validity of this program. We think that’s a very marginal chance at best.”

The state attorney general’s office scoffed at the lawsuit.

“Mr. Corry’s claims are bizarre and lack legal and logical consistency,” said Carolyn Tyler, spokesperson for Attorney General John Suthers. “We will aggressively defend the state against any legal challenge.”

Corry also has a history of legal troubles with marijuana, including illegal public use, and this may, in fact, be part of his motivation for the lawsuit.