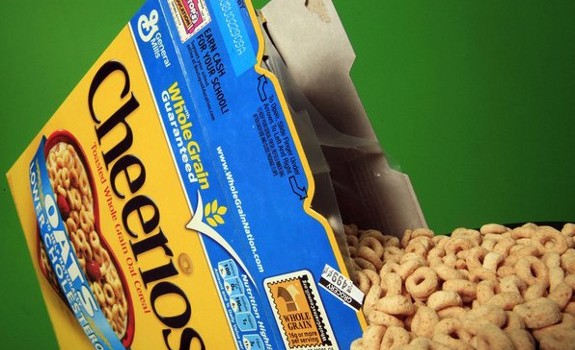 Mike Siemienas, spokesperson for one of the biggest food producers in the US, General Mills (GM), recently said they never used GMO oats in their product. But recently, the company has issued a statement saying that they have removed GMO corn, corn syrup, and sugar beets from their Original Cheerios. They also promise not to use GMO ingredients in their original Cheerios product. The change doesn’t apply to other types of Cheerios.

As NaturalSociety’s own Elizabeth Renter recently reported, the move by General Mills to remove GMOs from Cheerios is nice, but it’s hardly a major victory.It was an easy move for the company to take genetically-modified ingredients out of Cheerios because there were only 2 to begin with—corn starch and sugar beets. This simple decision will probably increase sales measurably. But to remove the genetically-modified ingredients from the rest of their cereal? Even General Mills says there’s no chance.

Still according to John Roulac, co-founder of GMO Inside, “This is a huge victory for the non-GMO movement.” Without a government mandate for labeling, Cheerios will now have the words “not made with genetically modified ingredients” printed on the boxes. It just goes to show that smart manufacturers should be cognizant of public opinion, and until the long-term science is truly in on GMOs, why would any company do less?

When GM asked why they decided to do it, their response was, “It’s simple. We did it because we think consumers may embrace it.” Tom Forsythe, of GM’s global communications branch, says they didn’t do it because of any concern for safety or public pressure, but if ‘consumer’s will embrace it’ sounds a little similar to ‘public pressure’ to you, we’re on the same page. In the past, GM has listed the following organizations in a statement on their website that support GMO use:

In defense of their use of GMO in the past the company states clearly on the same site:

“This technology is not new. Biotech seeds have been approved by global food safety agencies and widely used by farmers in food crops for almost 20 years.”

You may have noticed that their list is also heavily weighted toward support of the Grocery Manufacturer’s Association and government agencies that are funded with buyouts and political donations from Big Ag companies and Monsanto, which recently spent millions illegally to defeat a labeling bill in Washington. Independent science on GMOs tells a whole different story. The Grocery Manufacturer’s Association wants foods filled with GMO to be labeled ‘natural.’ At least your morning cereal is safe for now.

One response to “Cheerios Switches to Non-GMO After Activist Complaints”