Did You Know: California Legalized Selling Food Made From Home & 1001 Local Businesses Sprung Up 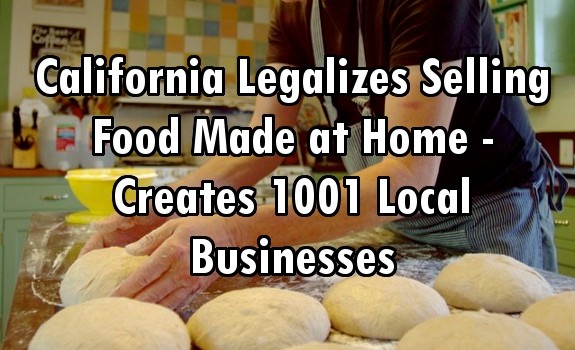 Imagine growing your own heirloom, non-GMO tomatoes and then brewing up a batch of pasta sauce that would make Pavarotti sing from his grave. Or, an angel food cake from a recipe your great, great grandmother passed down to you that makes everyone’s mouth water, full of fresh, free-range, organic eggs from chickens roosting in your backyard. Now, imagine being able to sell these confections to the locals in your own town without being regulated, taxed, and FDA’d to death. California has made this possible for thousands in their state in January 2013, all because they legalized selling food made at home.

In a time when food sovereignty is threatened and Monsanto wants to control every forkful of sustenance we put into our mouths, this isn’t just a great revenue and local business support, but a radical, in-your-face move that tells the Feds just where they can stick their regulations.

It used to be, if you sold a loaf of home baked bread, you could get a knock on your door from a government official. No exaggeration. It has happened to Mark Stambler, of Los Angeles, and many others. He was forced to stop making bread for over 18 months. Stambler was even featured in an LA Times piece, with mention of his specially created brick oven and artisan baking skills.

Mark’s loaves came in first place at the county state fair, but no matter, the government wouldn’t allow him to sell his grains to anyone – until now.

Assemblyman, Mike Gatto, and Stambler helped to draft the California Homemade Food Act (AB 1616) to legalize home-made food. AB 1616 was overwhelmingly popular with lawmakers, passing the California State Assembly 60 to 16 and unanimously passing the state Senate in August 2012. Upon signing the bill, Gov. Jerry Brown praised AB 1616 as a way to “make it easier for people to do business in California.”

Fortunately, as of January last year Stambler has been back to making bread again – one of the first to do so ‘legally’ in his state. Now there are over 1200 home-made food businesses to thank him and Rep. Gatto for their efforts. Power to the people – and let them eat some good bread!

5 responses to “Did You Know: California Legalized Selling Food Made From Home & 1001 Local Businesses Sprung Up”