What do you think?

It is an undisputed fact that marijuana prohibition is losing traction at record speeds. If the influx of decriminalization, medical legalization, and recreational legalization bills tells us anything, it’s that the population is beginning to truly accept and even desire marijuana legalization. Now, a new ‘gold standard’ survey tells us that this notion is in fact true – finding that a majority of Americans support the legalization of marijuana for the first time in recent history.

For the poll, conducted by the General Social Survey – a national, ‘reliable’ survey conducted every two years and widely considered to represent the gold standard for public opinion – researchers asked 1,680 people whether they thought marijuana should be made legal.

The survey found that:

“We’ve been measuring public attitudes toward legalization of marijuana since the ’70s,” Tom W. Smith, director of the GSS, said in an interview with Yahoo News. “In 2012, you had a plurality of Americans against legalization. Now, in 2014, you have a majority in favor of legalization.” 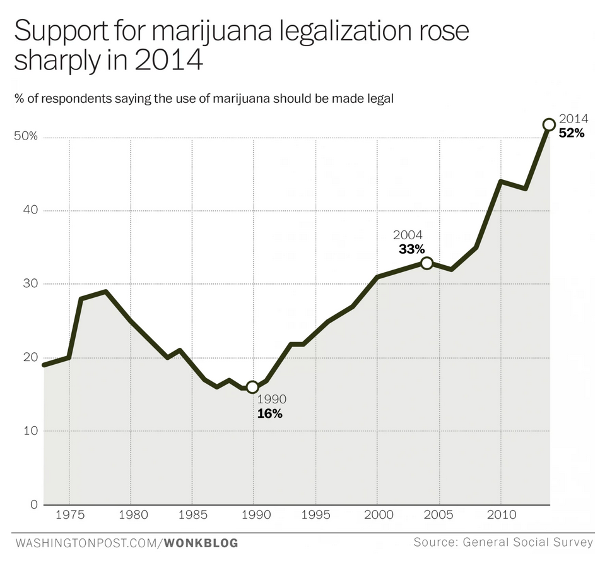 The Washington Post points out that while supportive votes have increased, the percentage of undecided respondents on the question of marijuana has been relatively high over the past decade.

“It shows how attitudes are in flux. They’re just not sure,” Smith said. “They might think medical marijuana is OK but not further than that.”

Though we’ll likely continue to see an increase in individuals that believe in decriminalizing and legalizing marijuana, the ‘undecided’ opinions may be swayed to the ‘anti-marijuana’ side if things don’t pan out well in states where recreational marijuana is legalized – Colorado, Washington, Alaska, the District of Columbia, and soon Oregon.

But so far, it seems that the legalization has had more benefit than negative impact, creating tens of millions of dollars in tax revenue, creating thousands of jobs, and having little noticeable impact on communities in terms of abuse and crime.

Back in 1973, only 19.2% of Americans supported legalization. In 1987, it bottomed out at 15.6%. Ever since then, support for legalization  has generally climbed steadily.

Morgan Fox, communications manager for the Marijuana Policy Project, says that Americans are tired of laws that punish adults for enjoying a substance that many argue is safer than alcohol.

“Hopefully their elected officials are paying attention and preparing for the inevitable,” Fox said in a statement. “The failures of marijuana prohibition are too obvious to ignore forever, which is evidenced by the growing support for ending it.”

What are your feelings toward marijuana legalization?