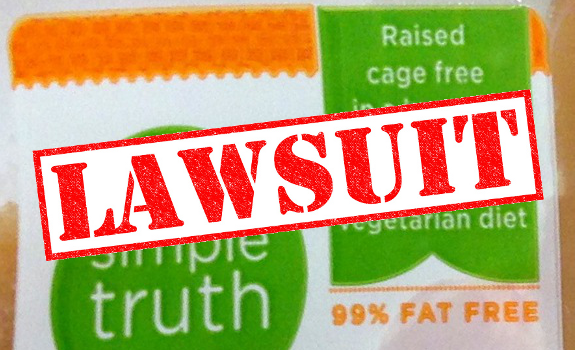 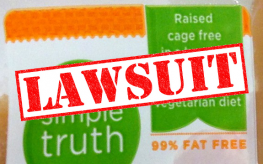 Kroger, the largest supermarket chain in the U.S. (by revenue), realizes that consumers care about what they put on their tables, but the company is misleading the nation about some foods, making unacceptable false claims. One product the company is lying about is called Simple Truth Natural Chicken, claimed to be ‘cage-free’ and ‘raised in humane conditions’. These claims have led to a recent lawsuit against Kroger.

These claims are extremely confusing and meant only to generate more income for the grocery store chain – not to treat animals or consumers, for that matter, fairly. What this comes down to is false advertising on labels – a practice the FDA seems to allow left and right.

Many consumers will pay extra for products that are better for their health. What’s more, there are many individuals searching for meat-providing which care for animals more equitably, instead of the hideous ways that they are known to be treated on factory farms. Kroger’s label implies that chicken grown for their grocery stores are treated better than birds grown in factory farms, but this simply isn’t the case.

First of all, chickens raised for meat in the US are grown in cages, although hens grown for their eggs, are. So the ‘cage-free’ portion of the label is already misleading. It’s a marketing ploy, at best. When a customer called to ask what ‘raised in a humane environment’ meant, she was simply told that, “they live on the floor of a barn in poultry house.”

According to PETA, that means a huge windowless shed is utilized to cram as many as 40,000 birds for harvesting their meat. Chickens normally grow well in groups of about 90. Otherwise, they become stressed from crowding and relentlessly peck at one another causing injury and death. The conditions of a ‘chicken house’ are anything but humane. Michael Specter, a longtime staff writer for The New Yorker, who also visited a chicken shed once wrote:

“I was almost knocked to the ground by the overpowering smell of feces and ammonia. My eyes burned and so did my lungs, and I could neither see nor breathe …. There must have been 30,000 chickens sitting silently on the floor in front of me. They didn’t move, didn’t cluck. They were almost like statues of chickens, living in nearly total darkness, and they would spend every minute of their six-week lives that way.”

Simple Truth Chicken is produced by a company called Purdue, and they only follow minimal industry standards that basically necessitate inhumane treatment of these animals before they end up on your plate – but Kroger wants you to pay extra. They can end up with painful bone deformities being raised this way, as well as ruptured tendons, cardiovascular problems, and lameness.

They are selectively bred for being a ‘broiler’ or a chicken with lots of meat, and they spend most of their lives in chronic pain. Kroger is selling factory farmed chicken.

As I mentioned earlier, there is currently a lawsuit against Kroger for this misleading label, but a Kroger spokesperson simply states the label is ‘accurate.’ Consumers deserve to know how their chicken is really raised.

You can sign a petition to tell Kroger to stop lying about their Simple Truth chicken here. You can also simply boycott them, until they make amends to their customers and change their ways.