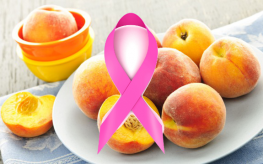 A new study from researchers at AgriLife Research at Texas A&M indicates eating two to three peaches each day could slow the spread of breast cancer in women.

Published in the Journal of Nutritional Biochemistry, the recent study says breast cancer cells in mice were dramatically impacted by the consumption of peaches.

“Cancer cells were implanted under the skin of mice with an aggressive type of breast cancer cells, the MDA-MB-435, and what we saw was an inhibition of a marker gene in the lungs after a few weeks indicating an inhibition of metastasis when the mice were consuming the peach extract,” said Dr.  Luis Cisneros-Zevallos.

“Furthermore, after determining the dose necessary to see the effects in mice, it was calculated that for humans it would be equivalent to consuming two to three peaches per day.”

The researchers say phenolic compounds present in the peach extract are responsible for slowing the cancer progression. This is doubly important because most breast cancer deaths are attributed to the spread of the cancer throughout the body. Further, as Dr. Cisneros-Zevallos says, their research offers people something they can do immediately to potentially aid in their fight against this deadly disease.

“The importance of our findings are very relevant, because it shows in vivo the effect that natural compounds, in this case the phenolic compounds in peach, have against breast cancer and metastasis. It gives opportunity to include in the diet an additional tool to prevent and fight this terrible disease that affects so many people,” said Cisneros-Zevallos.

A member of the rose family, peaches can be found in over 700 varieties. They are grown commercially in 28 states and are in-season from May through September. Perhaps an even more interesting fact about these common fuzzy fruits is that their consumption could aid in the fight against breast cancer.

Breast cancer is the most common form of cancer in the western hemisphere. In 2013, there were more than 232,000 new cases in the U.S. Most often the ailment is treated with aggressive therapies and toxic poisons like chemotherapy, which some successfully argue are just as damaging as the cancer itself.

Although the study used the peach variety Rich Lady, the researchers say other varieties shame similar polyphenolic compounds. He says the equivalent “dose” for humans that could potentially show the same effects as those they created in mice would be two to three peaches each day.