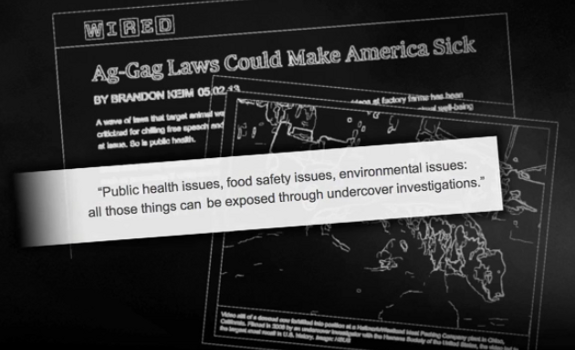 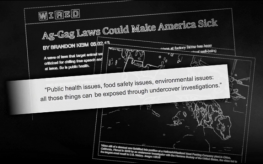 Whether you consider yourself an animal rights activist or you’re “just” a pet owner, seeing an animal brutalized can conjure feelings of outrage and disgust. Even meat eaters don’t really want to know what goes into the production of their burger, because ultimately, it’s distasteful. But when meat and/or dairy production amount to horrific abuse, don’t we have a right to know?

New laws, referred to as ”ag-gag” laws, seek to silence the people who would reveal what really goes on behind factory farm closed doors, and these laws aren’t being passed in the best interests of the people, but in the interests of Big Agriculture.

Several years ago, McDonald’s and Target fired their egg producer after 60 Minutes aired troubling footage of their hatchery hens in deplorable conditions. That contract was worth millions to the egg producer. Footage of animal cruelty and unsanitary conditions have tainted several large food producers’ images and hurt their bottom-lines. Butterball was publicly shamed when footage of workers beating turkeys with metal bars escaped into the media.

You would think these corporations would seek to remedy the potential fall-out by changing their practices, by ensuring the animals they produce are treated humanely as possible during their short lives. But, that would be wrong. Instead of cleaning up their image by changing their ways, Big Agriculture and the lobbyist groups that protect them would like to see the whistle-blowers turned into criminals.

Ag-gag laws are those that criminalize individuals taking photos or videos at factory farms with the intent to reveal inhumane, unsanitary, or questionable practices. Such laws have already been passed in some states and are in the works in many others.

According to Wired.com, Iowa, Utah, and Missouri passed such laws in 2011 and 2012. Ten more states have pending legislation on the table in 2013. The most frightening proposed law of all, in Pennsylvania, would make it a crime to even download such videos from the internet. Yes, not only could the whistleblower face criminal charges, but so could anyone who chooses to make use of their product.

Read: Factory Farms – Bad for Everyone

As reported on BillMoyers.com, this isn’t done in the interest of the animals, your food quality, or even small-time farmers—it is all in the name of corporate interests. And ALEC (The American Legislative Exchange Council) is leading the charge. It’s ALEC who first described these whistleblowers as “militants” and “terrorists”, seeking to drum up emotional response to gain support. Fortunately, we see through them.

These laws, once passed, will only put the U.S. food industry further beyond our reach. They will only make it more difficult to truly know what goes into our food production and ultimately our bodies. Corporations would love nothing more than to have their operations made completely secret, but we can’t let them do that. Contact your state lawmakers today to ask about pending ag-gag legislation and urge them to fight such secretive and harmful practices.