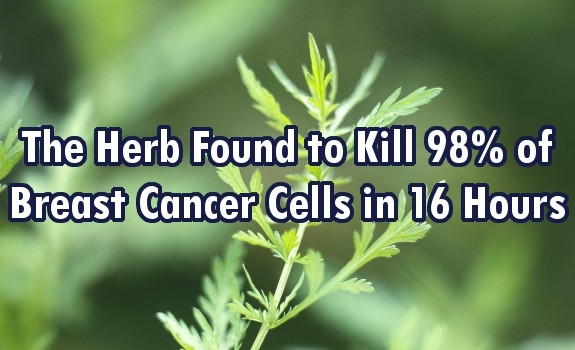 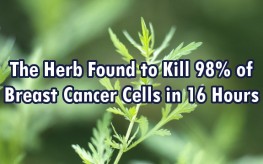 According to studies that were published in an issue of Life Sciences, artemesinin – a derivative of the wormwood plant used in Chinese Medicine – can kill 98% of breast cancer cells in less than 16 hours. The herb used alone caused a 28% reduction in breast cancer cells, but when paired with iron, sweet wormwood was able to eradicate cancer almost entirely. What’s more, normal cells were not negatively affected in the experiment by this treatment.

Artemisinin has been used in the past as a powerful anti-malarial herb, but it now has been proven to be a cancer-fighter, too. When subjects in the published study were given an iron supplement, which often accumulates in the breast tissue but especially so in cancerous cells, the artemisinin was able to selectively target ‘bad’ cells and leave ‘good’ cells alone.

Iron accumulates in cancerous cells due to special receptors that help them in cell division, called transferrin receptors. Normal cells likely have these receptors as well, but cancerous cells have them in greater abundance, and thus can be targeted by the iron-artemisinin combination, like a 1-2 punch.

There have been many experiments now that prove this sweet wormwood derivative can effectively eradicate disease in the presence of iron. The extract has been used for thousand of years in China to treat malaria. The malaria parasite cannot live in the presence of artemisinin because they are iron-rich, but the treatment works just as well for cancerous cells, too. Bioengineers Henry Lai and Narendra Singh of the University of Washington, Seattle were the scientists who initially made this discovery. This is yet another example of a natural herb causing cancerous cell apoptosis.

While the sweet wormwood extract has been somewhat difficult to obtain for a fair price for countless years, it is now on its way to being mass-produced by biotech. Will the result be positive and promising?

“It’s the volatility that really makes the supply chain for this life-saving drug just a complete train wreck,” says Jack Newman, chief scientific officer of the California-based biotech firm Amyris. “When we first started talking about this,” Newman says, “we gave it 1,000 to 1 odds of ever working. “

French drugmaker Sanofi is expected to make 50 to 60 tons of artemisinin each year, striving to supply enough demand for the global market.