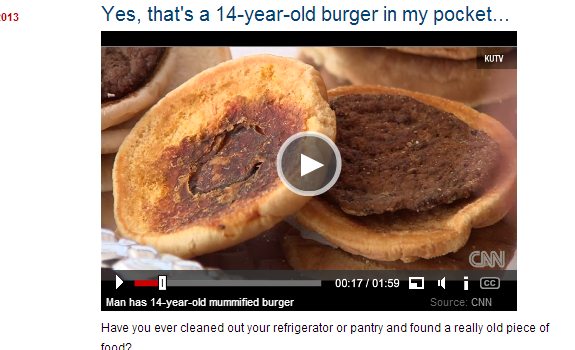 We know fast food is loaded with synthetic chemicals and is downright devastating to your health, but a newly discovered ‘mummified’ McDonald’s burger visually represents just how little the Frankenfood burger actually changed over 14 years time.

Purchased by David Whipple way back in 1999 on July 7th, the burger looks (and even smells) virtually the same as the day he bought it. In fact, there is no visible mold development or decay of any kind. Whereas you would begin smelling a real homemade beef burger within a matter of hours if it were to sit inside a hot closet, the McDonald’s burger went completely unidentified for 14 full years as it did not even put off any kind of smell. Whipple actually found it by accident when going through his closet assortment.

It wasn’t until Whipple and his family were sorting through the old coats to donate to Goodwill that he found the old hamburger and decided to inspect it. 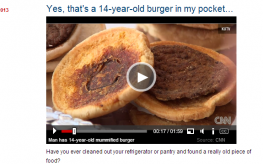 But according to McDonald’s, that’s perfectly normal! In fact, their press response states that McDonald’s burgers are just like what you buy at the store, 100% beef that just magically does not decompose because… well, because science, that’s why! According to McDonald’s post on the issue, the company states that certain conditions need to exist in order for food to attract bacteria and mold, or even decompose. The company said:

“…what is scientifically known is that in bacteria and mold only grow under certain conditions…In fact, any food purchased from a restaurant or grocery store or prepared at home that lacks moisture would also dehydrate and see similar results if left in the same environment.”

An interesting challenge, one that I may perform. Would a homemade burger that has been ‘freshly prepared’ (which they say their burgers are) be the same after 14 hours let alone 14 years? How about whether or not it would begin to stink? McDonald’s says it would have actually dehydrated and maintained its amazing form for 14 years.

Well, one thing that’s for sure is that the mummified burger owner David Whipple isn’t complaining. He has been offered thousands of dollars for the burger, but instead insists on keeping it as a relic of sorts.