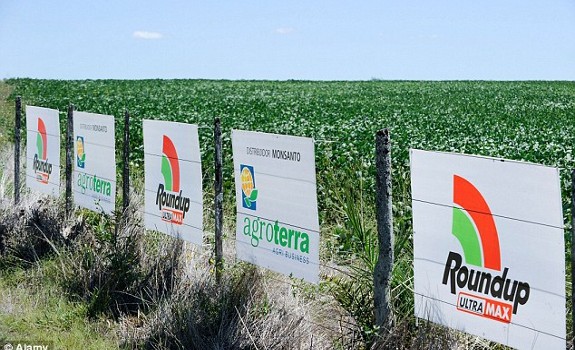 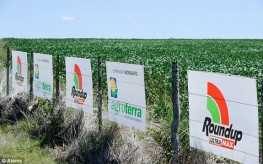 A global threat? A slight nuisance? Whatever you decide to call it, the U.S. government gave Monsanto a patent for the main ingredient in toxic RoundUp, glyphosate, in 2010. It has been killing a wide range of pathogenic organisms (including the healthy bacteria we need to fight super bugs) even since it first came into use in 1974.

Monsanto will tell you that:

“Roundup® brand herbicides continue to be a perfect fit with the vision of sustainable agriculture and environmental protection. In fact, their use on Roundup Ready® crops has allowed farmers to conserve fuel, reduce tillage and decrease the overall amount of herbicides used.”

These are all claims which have been proven to be untrue.

So why would the company seek a patent for an herbicide to be used as an antibiotic? All the more important to ask is, why is this toxic ingredient allowed to be used when it has been proven again and again to allow toxic bacteria like clostridium to flourish?

In 2013, the Chief Medical Officer for England, Dame ally Davies, announced that antibiotic-resistant diseases posed an ‘apocalyptic’ threat to the world. The CDC has even admitted (finally) that the age of antibiotics must come to an end as antibiotic-resistant bacteria begin to reign supreme over conventional treatments. Has Monsanto purposefully created a healthy bacteria killer?

“Despite what the media and so-called “experts” proclaim, there are NO peer-reviewed scientific papers establishing the safety of GMO crops.”

To be honest, not a single person has been able to establish that genetically engineered proteins (i.e. the foreign proteins produced by the genetically modified plant), or the chemicals we’re consuming in ever-growing quantities as a result of the genetic engineering process are safe. In fact, the facts point quite clearly in the opposite direction.

Dr. Huber also explains that though glyphosate is an herbicide, it was first patented as a mineral chelator. It mobilizes nutrients so that your body cannot absorb them. Since glyphosate was also patented as an antibiotic, it does double damage. He says:

“When you take the good bacteria out, then the bad bacteria fill that void, because there aren’t any voids in nature. We have all of these gut-related problems, whether it’s autism, leaky gut, C. difficile diarrhea, gluten intolerance, or any of the other problems. All of these diseases are an expression of disruption of that intestinal microflora that keeps you healthy.”

So glyphosate, which has been patented as both a mineral chelator and an antibiotic, both of which have tremendous implications, is being used willy nilly all over the world. All the while, the agencies which are supposed to protect public health continue to look the other way.

While there are many natural chelators in soil, one given a patent that would leach minerals from our own bodies while destroying healthy bacteria is highly questionable at best, and should have never received a rubber stamp from the USDA, FDA, or any other agency.

What’s more, is that since given its patent, the amount of glyphosate exposure has been proven to be quite alarming. In the scientific journal Entropy, it was stated:

“Contrary to the current widely-held misconception that glyphosate is relatively harmless to humans, the available evidence shows that glyphosate may rather be the most important factor in the development of multiple chronic diseases and conditions that have become prevalent in Westernized societies.”

The toxic substance works by interfering with the biochemistry of bacteria in our GI tracts, destroying amino acids in what is called the shikimate pathway. Specifically, glyphosate depletes the amino acids tyrosine, tryptophan, and phenylalanine, which can then contribute to obesity, depression, autism, inflammatory bowel disease, Alzheimer’s, and Parkinson’s. It doesn’t work immediately, except in cases of acute toxic exposure, but develops little by little.

“Negative impact on the body is insidious and manifests slowly over time.”

So how exactly is all your good bacteria – the backbone of your immune system – being killed unceremoniously, but deliberately, and slowly? One answer is glyphosate. It is gut wrenching, isn’t it?