But not everyone is happy with the outcome 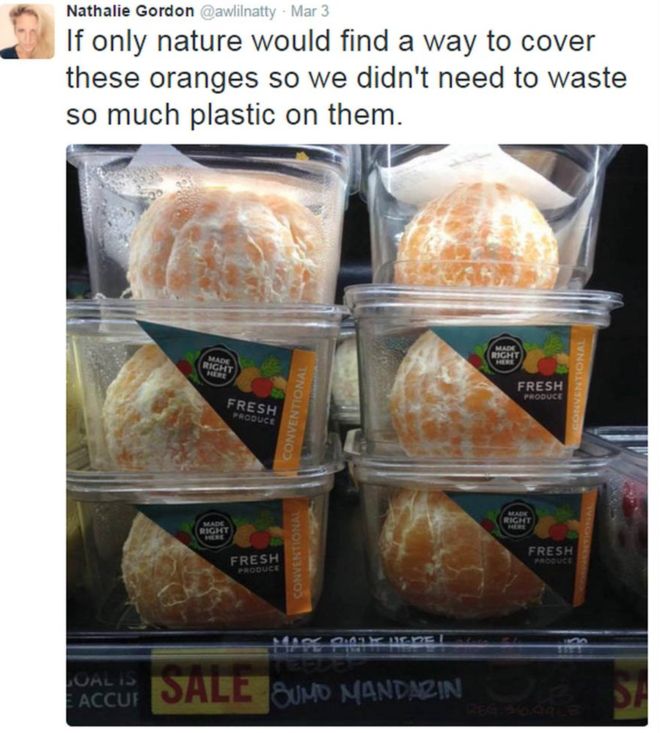 Plastic containers containing peeled oranges had people absolutely furious, and it all started with 1 little sentence. A woman named Nathalie Gordon tweeted a photo of the oranges on Twitter March 3 with this snarky comment:

The photo has been favorited and retweeted hundreds of thousands of times.

But these weren’t just oranges. These were Sumo tangerines, which is a fairly rare find as citrus fruits go. And they were “just” $5.99 per pound. That price may sound excessive, but if you look at Gordon’s photograph of the orange globes, you’ll see that the packaging boasts they were “Made Right Here.” No, those babies weren’t peeled in some God-awful sweatshop on another continent, they were peeled by local Millenials and hipsters right there at the store, and rumor has it that makes them taste much sweeter!  [1]

But that’s neither here nor there, because the focus of social media users’ ire was the unnecessary plastic packaging. I mean, Whole Foods is supposed to be all about environmental stewardship. Take a look at the company’s core values sometime.  One of its purported “Wise Environmental Practices” is this:

“Reducing waste and consumption of non-renewable resources. We promote and participate in recycling programs in our communities. We are committed to re-usable packaging, reduced packaging, and water and energy conservation.”

So furious were the angry online hoards that Whole Foods eventually responded back to Gordon with this:

Consumers were miffed at Whole Foods last year, too, when the company started selling its Asparagus Water – literally just water with a few stalks of asparagus in it – for $6 a pop. And like the Sumo tangerines packaged in earth-destroying plastic, the company nixed that product, too.

But some people are now pointing their anger at Gordon rather than at Whole foods, arguing that the pre-peeled oranges were helpful to the elderly and people with disabilities. From the looks of it, just as many people are ticked off about Whole Foods pulling the peeled oranges from store shelves as there were people who were ticked off about them being there in the first place.

Why the oranges caused a ruckus and not other packaged produce is anyone’s guess because, when you think about it, all fruit comes enrobed in its own natural “packaging” and Whole Foods sells other produce packaged in plastic – including sliced oranges. What, people can’t slice their own watermelon or cantaloupe?

It just goes to show the power of an image, and a little well-placed sarcasm.