GMO labeling could soon be illegal

It’s time for President Obama to keep his 2007 promise to label GMOs. In his own words, Obama declared it was our ‘right to know’ what we are eating, and we agree.

That’s why I have launched a White House petition asking Obama to keep his 2007 promise to enact GMO labeling nationwide.

The petition comes at a crucial turning point in the fight for GMO labeling, as the notorious ‘DARK Act‘ that would make GMO labeling illegal has been approved by the House of Representatives and is moving towards the Senate. The fate of the legislation, officially known as the ‘Safe and Accurate Food Labeling Act,’ could soon come down to Obama’s signature (or veto). In other words, it’s now more essential than ever that we bring Obama’s 2007 promise to the national spotlight.

Otherwise, we could soon see the same President who promised GMO labeling sign off on a bill that would make it illegal.

In the petition, I write to the president:

In your 2007 campaign speech, you promised to protect our ‘right to know’ what’s in our food by labeling genetically modified organisms (GMOs) in the food supply.

It has now been eight years since that promise was made, and you have done nothing to act on this promise.

What’s more, a food bill passed by the House known as the ‘DARK Act’ could soon make mandatory GMO labeling illegal in the United States.

If you are to sign this bill into law, you would be doing the exact opposite of what you promised us in 2007.

Please deliver on your 2007 promise. Veto the DARK Act that would make GMO labeling illegal, and institute mandatory GMO labeling in the United States.

We have the right to know what we’re eating.

Let’s remind Obama of his 2007 promise and ensure that he does not sign off on the DARK Act, making GMO labeling illegal! 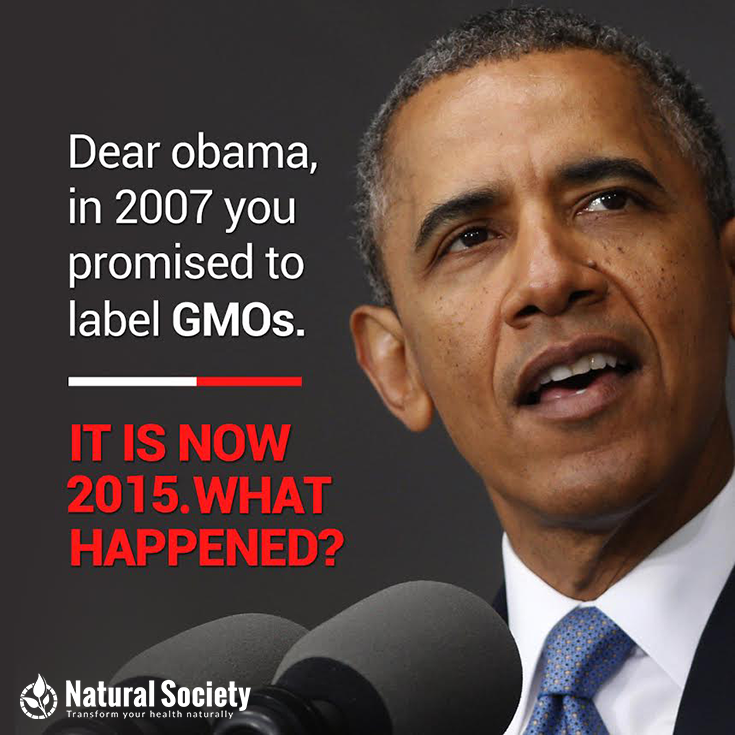