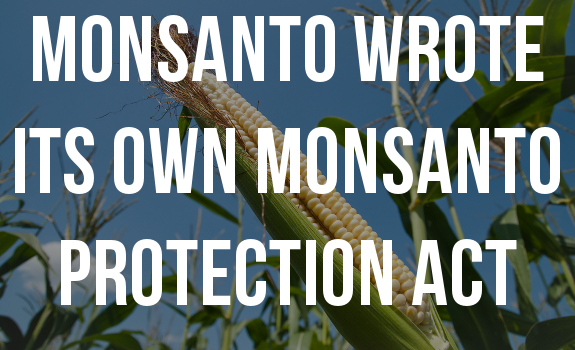 It should come as no surprise to many of you to find out that Monsanto actually authored the wording of its own Monsanto Protection Act hidden in the recently passed and signed Continuing Resolution spending bill. How could a major corporation write its own laws and regulations, you ask?

Quite frankly I think it’s important to understand that the entire Senate passed the bill containing the Protection Act, but the politician who actually gave Monsanto the pen in order to write their very own legislation is no others than Roy Blunt — a Republican Senator from Missouri. As the latest IB Times article reveals, the Missouri politician worked with Monsanto to write the Monsanto Protection Act. This was confirmed by a New York news report I will get to shortly.

As you probably know I do not play the political clown game of left versus right, and instead highlight corruption and wrongdoing wherever it is found — regardless of party affiliation. In the case of Senator Blunt, he admits to colluding with Monsanto, a corporation that has literally been caught running ‘slave-like’ working conditions in which workers are unable to leave or eat (among many worse misdeeds).

This is one of the most blatant offenses against the citizens of the United States I’ve seen in a long time. A population that Blunt swore to serve. It’s not for the United States public at all, and it’s a serious matter that I don’t think is properly understood. The passing of this bill into law means that Monsanto is now immune from federal courts regarding any suspension or action on their crops that have been deemed to be dangerous to the people (or the environment).

This means crops that were approved and later found to damage the environment or the public will be immune from United States government action. Theoretically, one million studies could find that Monsanto’s latest creation was causing a massive cancer wave and under this law Monsanto could continue to peddle the crop to the public. The federal courts would (or will) be helpless to stop Monsanto, effectively giving Monsanto power over the entire branch of the United States government. Food Democracy Now, a major activist organization that organized signatures to fight the Monsanto Protection Act, described the rider:

“The Monsanto Protection Act would force the USDA to allow continued planting of any GMO crop under court review, essentially giving backdoor approval for any new genetically engineered crops that could be potentially harmful to human health or the environment.”

Senator Roy Blunt and those who knowingly passed the Monsanto Protection Act (including President Obama who signed it into law just last night) have chosen to serve corporations over people. Ironic, really, as corporations legally are people — a legal area commonly used to avoid real jail sentences for major CEOs and executives who knowingly were involved with the deaths of consumers around the world.

It’s sad, really. I read up on Senator Blunt, and he does seem to constantly side with corporations over the public. Even on his Wikipedia page one line reads that Blunt “consistently sided with Big Oil and other dirty polluters over a cleaner, more sustainable future.”I was even able to find a quote by Blunt defending his decision to allow Monsanto to write its own regulation through the Monsanto Protection Act. He told the NY Daily News in defense of the Monsanto Protection Act and his relationship with the company in writing the rider:

“What it says is if you plant a crop that is legal to plant when you plant it, you get to harvest it.”

I think Blunt is confused over which ‘people’ he is serving. I created this image to call Blunt out on his open decision to side with Monsanto over the public: 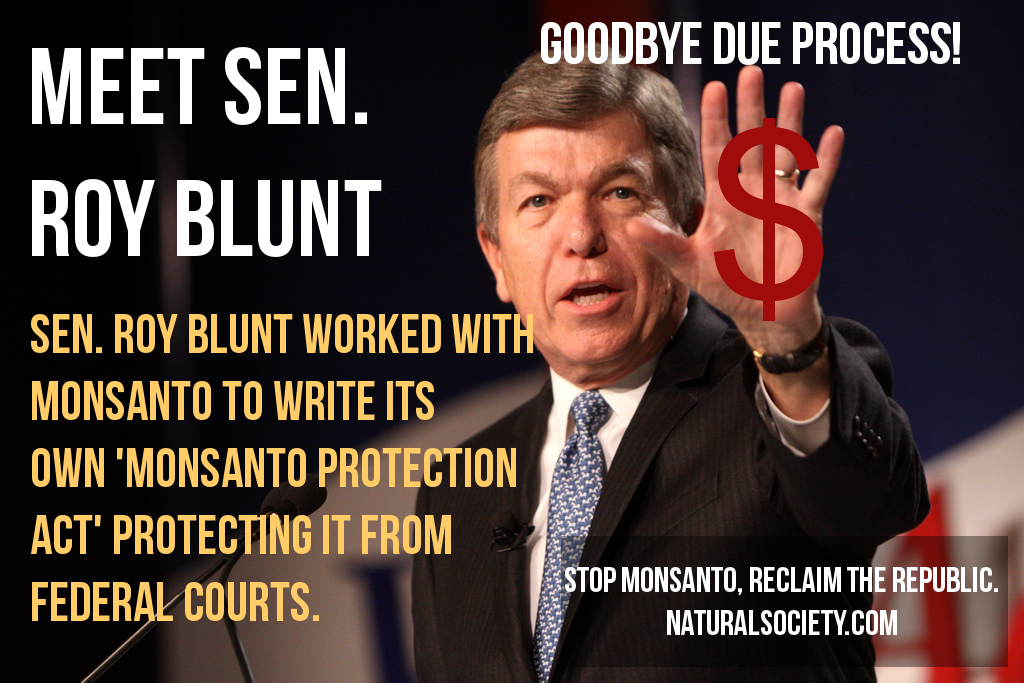 You can contact Senator Blunt through his website and let him know what you think about his decision to let Monsanto write its own Protection Act. No longer can we sit idly by while corporate juggernauts like Monsanto triumph over the people through swindling and deceit. Share this article, the image, and publicly denounce all politicians willing to sell their souls to Monsanto.