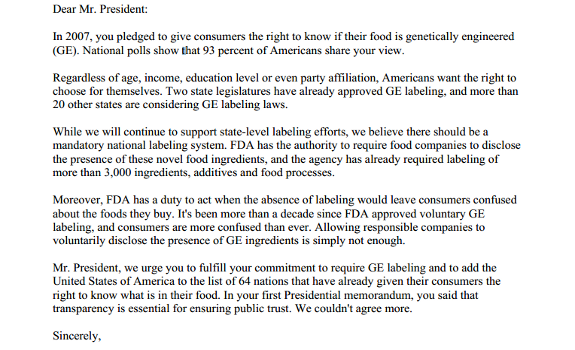 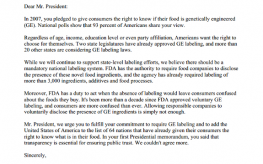 Obama promised in his 2007 campaign to label GMOs, but he has yet to follow through on that pledge. Now, over 200 anti-GMO groups are pressuring Obama to act. The Center for Food Safety, the Environmental Working Group (EWG), Just Label It, and other supporters of GE labeling including congressional champions, led by Rep. Peter DeFazio, D-Oregon (D-Ore.) signed a letter sent to President Obama.

As the letter stresses, no matter one’s education level, party affiliation, age, or income, we all deserve the right to choose what we eat. There are already 20 states considering GE labeling, but the letter urges national labeling laws:

“While we will continue to support state-level labeling efforts, we believe there should be a mandatory national labeling system. FDA has the authority to require food companies to disclose the presence of these novel food ingredients, and the agency has already required labeling of more than 3,000 ingredients, additives and food processes.”

Obama was caught on record stating that American’s deserved to know what was in their food while campaigning in Iowa, and nothing has changed in seven years – almost the entire duration of his two terms in office. Other signatories of the letter are anxious for Obama to take some action as well, including Ben & Jerry’s Ice Cream, Amy’s Kitchen, Annie’s Homegrown, Inc., Applegate, Stonyfield Farm, and Nature’s Path Foods. The transparency that he based much of his campaign upon is now gravely in question.

Relying on companies to voluntarily disclose the true ingredients in their foods, including GMO, is also not acceptable, since we have hundreds of examples of the food industry being negligent and outright misleading in their labeling – including calling things ‘natural’ when they are nothing but chemical concoctions.

M/center>
The FDA currently has the ability to require the food industry to label foods as genetically modified, but they do not. They already require the labeling of more than 3000 food ingredients, why not GMO?

“Corporations should not be allowed to withhold this kind of information from the public,” said Ken Cook, president and cofounder of EWG.

Violet Batcha, communications and social media manager of the Just Label It campaign says, “the FDA has a duty to act when the absence of labeling would leave consumers confused about the foods they buy.” It has been more than a decade since the FDA approved voluntary GE labeling and it has been entirely ineffective.

Gary Hirshberg, chairman and cofounder of Stonyfield Farm says, “This is not an effort to stop GMO’s, nor to mark them with a skull and crossbones – it is simply an exercise of our rights as citizens to know what we are buying and to be able to choose the ways that our foods are grown.’

A skull and bones poison symbol on GMOs would indeed be appropriate. GMOs have been linked to liver damage, harm developing human embryos, and cause multiple forms of cancer and reproductive issues.