What will they think of next?

Not only does the American public have all kinds of GMO food to navigate around, but now we have GMO mosquitoes to avoid. Especially for those who live in Florida, this will be quite the task. Has anyone ever tried not to get bitten in the Everglades?

As if this headline isn’t concerning enough, there are very good reasons why this plan to introduce genetically modified mosquitoes into the Florida Keys is a bad one. For instance, once they’re let loose, there is no stopping them from traveling up the peninsula of Florida and to the other 47 contiguous states.

Clearly, the Florida Keys Mosquito Control District (FKMCD) and biotech company called Oxitec are running an uncontrollable ‘experiment.’ Experiments of this nature are supposed to be first conducted in a locked down laboratory. In case things go awry, all the damage can be contained. However, once this GMO mosquito genie is let out of the bottle, there is no getting it back in. 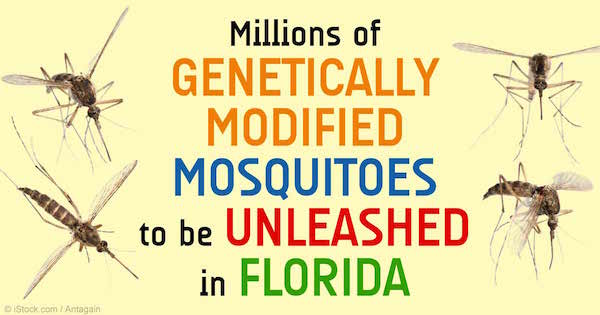 What is to Prevent the GMO Mosquito DNA from Being Injected into a Human Body?

This is where the experiment is fatally flawed. Those in charge say that they are releasing only male mosquitoes which do not sting.

Read: Millions of GMO Insects to be Released in Florida

“Oxitec has counteracted this objection by stating they only plan to release male mosquitoes, which don’t bite. This again sounds good in theory… but in reality, sorting millions of insects according to sex is no small feat. And even FKMCD notes that although ‘every effort is made to release only males,’ Oxitec trials show that .03 percent of the mosquitoes released are female.” [1]

That certainly doesn’t sound like a very good start that will inspire trust. Not only will some females be released at outset, they will proliferate over years of mating so their population will only increase.

What Else is Very Wrong with This Misguided ‘Experiment’?

The story goes that these particular mosquitoes have been bred in such a way so as to die in the absence of tetracycline. In this way, the plan is for them to live only until they mate. However, antibiotics like tetracycline are now found throughout water supplies everywhere because of their overuse. Tetracycline is one of the most common broad-spectrum antibiotics prescribed by physicians because of its effectiveness against a variety of bacterial infections.

Here’s how one commentator put it:

“Tetracycline and other antibiotics are now showing up in the environment, in soil and surface water samples. These GM mosquitoes were designed to die in the absence of tetracycline (which is introduced in the lab in order to keep them alive long enough to breed). They were designed this way assuming they would NOT have access to that drug in the wild. With tetracycline exposure (for example, in a lake) these mutant insects could actually thrive in the wild, potentially creating a nightmarish scenario.” [1] 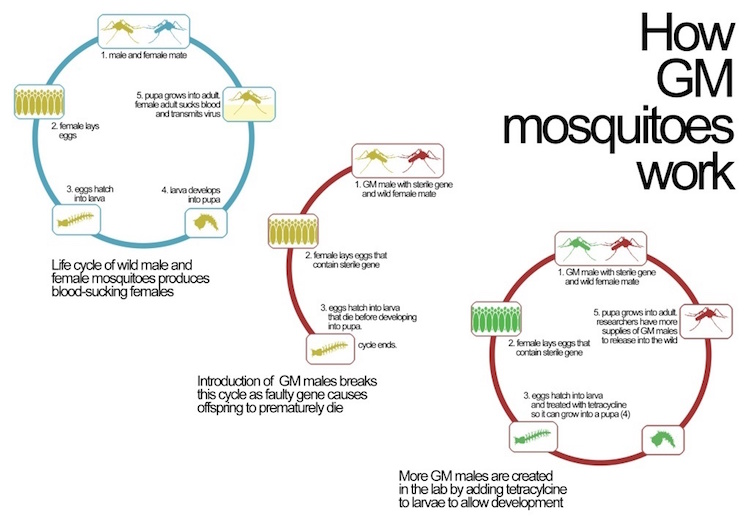 What Else is Wrong with Introducing GMO Mosquitoes in the Environment?

The true effects of genetically modified organisms are still not known. As the number of GMO crops and insects steadily increases, there is the unknown risk of overexposure to so much altered genetic material. At the current rate, society may get to a point whereby all the food grown on corporate farms contain GMOs. Together with an increasing number of GMO insect releases (such as GMO moths), over exposure is quickly becoming a reality.

Truly, it is what we don’t know about GMOs that is the most concerning. The public only hears ‘great’ things from the biotech companies that are eager to sell their new GMO creations. Why are we to believe them when there has been absolutely no long term testing to prove their safety or efficacy?

Once the GMO train left the station, the corporate engineers became determined to foist a whole new GMO paradigm on the American people, whether they want it or not. Perhaps it’s time to operate according to the generally accepted principle of informed consent. Schemes like GMO mosquito releases should never proceed, especially when informed consent has been lacking throughout the entire process.