The Dangers of Tap Water and How to Protect Yourself 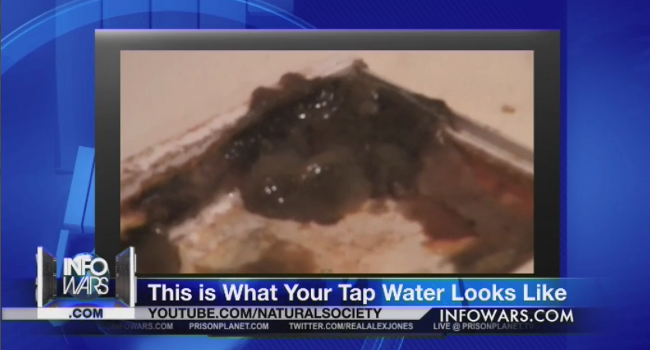 By Natural Society
It’s no secret that tap water contains a medley of harsh chemicals, heavy metals, fecal matter, puss, urine, and many other problematic substances. The dangers of tap water have been well documented throughout the past several decades, with officials now admitting that tap water is the exact same quality as wastewater (also known as ‘toilet on tap’). In the video above, I join Rob Dew of the Infowars.com Nightly News show to discuss the many dangers of tap water (fluoride in particular) and what to do about it.

The segment comes following the explosion surrounding the video I released just 3 days ago showing the putrid build up found in my water filtration device after funneling tap water through it for just one month and a few days. Generating more than 10,000 views per day organically, the video is a telling and graphic demonstration of just how contaminated your tap water really is.

If you are living in a city, for example, your tap water is likely loaded with pharmaceutical drug residues from birth control pills, antidepressants, antibiotics, and a host of other medications. Is it any wonder that antibiotic-resistant bacteria is continually popping up and causing problems throughout the world? One key thing I forgot to mention in the interview is the fact that 43,381 viruses have been found within the sewer system, many of which are completely unknown to scientists.

What this means is that our sewage system, which in many cases is turned into some form of tap water after being doused in chlorine and other chemicals, is actually breeding an unknown amount of deadly super viruses.

Beyond this looming threat is the presence of sodium fluoride. In many major cities, the average level of fluoride in the water is set to hover around 1ppm. As over 20+ other studies have discovered, Harvard research has revealed that this level of fluoride (as low as 1ppm) can impact IQ and potentially lead to permanent damage — especially in unborn children. The findings coincide with previous discoveries made public as far back as 1977 by the head of the Cytochemistry Section at the National Cancer Institute, Dr. Dean Burk.

In 1977, Dr. Burk estimated that fluoridation had actually caused about 10,000 deaths according to his research.

It’s very important to secure a water filtration device for you and your family. Anything is better than nothing, however if you can afford a high quality fluoride-removing device then it is highly recommended. I have no financial ties to any filtration companies, by the way. The cost of disease and poor health is much greater than the initial investment into purchasing a filter.