Above the Law: Supreme Court Sides with Monsanto over Farmers in Patent Case 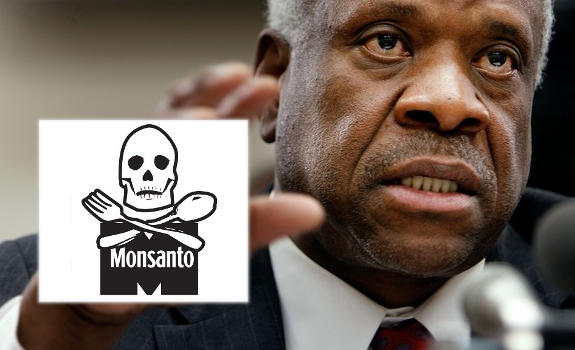 In a concerning decision made by the United States Supreme Court that once again highlights the close connection between Monsanto and government, the court upheld Monsanto’s financial crusade against struggling farmers who attempt to replant the GMO juggernaut’s patented GM seeds.

The decision should come as no real surprise when considering that Monsanto even has strong ties within the Supreme Court itself through Supreme Court Judge Clarence Thomas, who worked as a lawyer for Monsanto before obtaining the position. A connection that has been highlighted by a number of news outlets when it comes to the various Monsanto-related cases we have seen over the years. And one that is made even more blatant and concerning when considering that Clarence Thomas always fails to mention his connection.

But then again even greater events have taken place in the past that show how Monsanto really is above the law — especially when compared to the average citizen. If you or I committed the acts of the GMO giant over the past several decades, which of course is led by a group of executives who are likely beyond sociopathic and motivated purely be the almighty dollar, we’d be thrown in jail immediately.

Monsanto’s Repeated ‘Above The Law’ Status

Monsanto’s repeated acts of devastation against the people have generally ended in what amounts to a pesky settlement of X million dollars. This includes settlements over the Vietnam-era chemical warfare weapon Agent Orange, which killed hundreds of thousands and led to around 500,000 birth defects. It also includes a $93 million settlement with citizens of West Virginia’s Nitro, a town that was hit with dioxin as a result of Monsanto’s pollution from the creation of Agent Orange. As you may know, dioxin is one of the deadliest substances known to man.

The figures certainly are a lot to most people, but to Monsanto even 93 million is chump change. I personally believe, like many companies, they hide their true assets. But financials aside, the fact remains that they can pay their way out of jail. Instead of arresting the executives who made the decisions that led to deaths and other serious consequences, Monsanto is allowed to pay a settlement fee to the victims and avoid all criminal action.

And that’s key to being above the law itself.

Let’s also not forget the Monsanto-backed group that illegally used an FDA seal and fake quote to fight against the Prop 37 GMO labeling campaign. What happened to this group? Nothing. I was even on the press call line with the NY Times, LA Times, and others who were aggressively questioning why the Prop 37 campaign thought that the group was doing anything wrong. As it turns out, misuse of a United States government seal can lead to a $250,000 fine, twenty years in prison, and three years of supervised release — unless you’re sponsored by Monsanto.

Ultimately, Monsanto’s days are numbered. We see great movements like the March Against Monsanto and others that will come from it, and such forms of corruption will ultimately be peacefully rooted out from our government system.

8 responses to “Above the Law: Supreme Court Sides with Monsanto over Farmers in Patent Case”