Could it be our solution to antibiotic-resistance?

In the midst of fighting super bacteria which are resistant to modern-day antibiotics, a one-thousand year-old Anglo-Saxon potion made out of onions, garlic, wine, and bile from a cow’s stomach was found to wipe out the resistant superbugs like MRSA, according to new research.

Discovered in one of the earliest known medical textbooks, Bald’s Leechbook, this ancient ‘eyesalve’ remedy calls for two species of Allium (garlic and onion or leek), wine and oxgall (bile from a cow’s stomach) to be brewed in a brass vessel. So scientists made an attempt at duplicating the recipe.

“We chose this recipe in Bald’s Leechbook because it contains ingredients such as garlic that are currently investigated by other researchers on their potential antibiotic effectiveness.

And so we looked at a recipe that is fairly straightforward. It’s also a recipe where we are told it’s the ‘best of leechdoms’ — how could you not test that? So we were curious,” said Christina Lee, an expert on Anglo-Saxon society from the School of English at the University of Nottingham

Microbiologist Freya Harrison, who led the work in the lab at the School of Life Sciences, said:

“We recreated the recipe as faithfully as we could. The Bald gives very precise instructions for the ratio of different ingredients and for the way they should be combined before use, so we tried to follow that as closely as possible.”

After gathering all of the ingredients, which involved having to find and travel to a 19th-century old vineyard, the researchers tested the recipe on cultures of the MRSA bacterial strain. MRSA is known to resist conventional antibiotics. 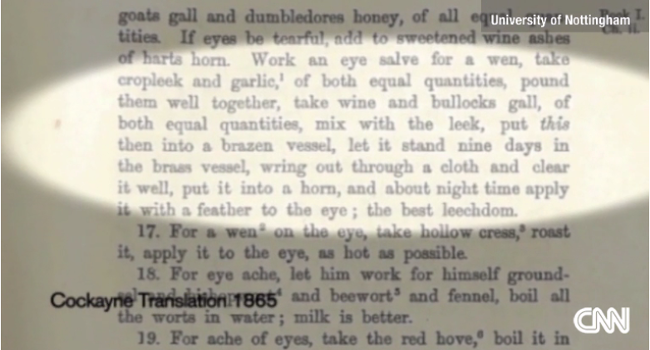 While having realistic expectations, the scientists were reportedly astonished by the results:

“What we found was very interesting — we found that Bald’s eyesalve is incredibly potent as an anti-Staphylococcal antibiotic in this context.

We were going from a mature, established population of a few billion cells, all stuck together in this highly protected biofilm coat, to really just a few thousand cells left alive. This is a massive, massive killing ability,” Harrison said.

Further adding to the good news is that even after 3 more recipes were made from scratch, the positive results were duplicated. What’s more, the salve is said to retain its potency for a long period of time after being created and stored.

The research team says that the medicine kills up to 90% of MRSA bacteria in “in vivo” wound biopsies from mice.

Will this recipe be one of our many potential solutions to the superbugs our modern-day medicine can’t defeat? Hopefully this research is embraced and we can move toward an alternative solution.

“I still can’t quite believe how well this 1,000-year-old antibiotic actually seems to be working,” Harrison said. “When we got the first results we were just utterly dumbfounded. We did not see this coming at all.”

“Obviously you can never say with utter certainty that because it works in the lab it’s going to work as an antibiotic, but the potential of this to take on to the next stage and say, ‘yeah, really does it work as an antibiotic’ is just beyond my wildest dreams, to be honest.”