If the world were to lose honey bees, it would be a crisis for humanity unlike any we have ever seen. The food supply would shrink drastically, leaving large swaths of the Earth’s population to starve. Unfortunately, bees face numerous threats, and bacterial diseases are among the direst of these threats (along with neonicotinoid pesticides). Researchers in Finland say they’ve created the first-ever vaccine for insects, and it could help protect struggling honey bee populations.

In the researchers’ crosshairs is a disease called American foulbrood (AFB), one of the biggest threats to honey bees. The infectious disease can devastate hives and spread at warp speed. The disease works by bacteria feeding on larvae and then generating more spores that assist the malady in spreading further.

News of the vaccine – still in the testing phase – has sparked both excitement and skepticism among beekeepers. Three years ago, the same researchers were recognized in Entomology Today for discovering the “key to bee vaccination.”

Disease can spread rapidly and quickly become devastating to honey bee hives because insects’ immune systems lack the antibodies necessary for fighting diseases. Scientists Dalial Freitak and Heli Salmela of the University of Helsinki say they solved that conundrum after Salmela’s study of a protein called vitellogenin seemed to complement her own work, in which she found insects that were exposed to bacteria were able to pass on an elevated immune response to their offspring. 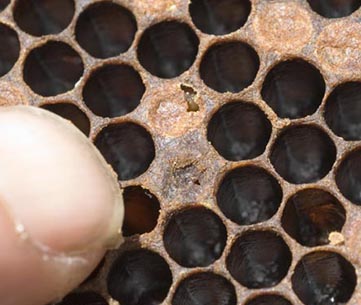 In a news release, Freitak said:

“Now we’ve discovered the mechanism to show that you can actually vaccinate them. You can transfer a signal from one generation to another.”

The vaccine, dubbed PrimeBEE by the Finnish team, can be delivered to the queen via a sugar patty. Another option is for beekeepers to simply order a queen that has already been vaccinated. Right now, PrimeBee has neither a price nor a date for when the vaccine will become commercially available.

AFB is currently “a death sentence” for honey bees, according to Toni Burnham, president of the D.C. Beekeepers Alliance in Washington. She explained that “if a colony is diagnosed with AFB – regardless of the level of the infestation – it burns. Every bit of it burns; the bees are killed and the woodenware burns, and it’s gone.”

AFB is such a looming threat to bees that Burnham’s group never recommends buying used hives and other equipment.

“They have pulled 100-year-old samples out of storage and have been able to reinoculate honey bee hives with American foulbrood spores.”

PrimeBEE could be the tip of the iceberg when it comes to fighting the diseases that threaten bees.

Freitak said in a statement:

“We hope we can also develop a vaccine against other infections, such as European foulbrood and fungal diseases. We have already started initial tests. The plan is to be able to vaccinate against any microbe.”

Read: List of Foods We Will Lose if We Don’t Save the Bees

Honey bees contribute about $20 billion to U.S. crop production, as they pollinate a variety of foods, including apples, melons, blueberries, and cherries. In fact, blueberries and cherries are “90% dependent on honey bee pollination,” according to the American Beekeeping Foundation. [2]

“One crop, almonds, depends entirely on the honey bee for pollination at bloom time.”