As of September 30, in a first for the United States, 7 species of yellow-faced bees native to Hawaii are under the protection of the Endangered Species Act. [1]

The precious pollinators were added to the endangered species list by the U.S. Fish and Wildlife Service after years of study by the Xerces Society, state government officials. Independent researchers concluded that the insects are under threat.

The rule is effective October 31.

Sarina Jepson, director of endangered species and aquatic programs for Xerces, based in Portland, said the non-profit organization was involved in the initial petitions to protect the bee species. [2]

The Xerces Society states that its goal is to protect nature’s pollinators and invertebrates, which are crucial to the health of the overall ecosystem.

While yellow-faced bees can be found in other areas of the planet, the 7 species under federal protection are native only to Hawaii and pollinate plants indigenous to the islands.

The flying insects can be found in a plethora of Hawaiian habitats, including coastal environments and high-elevation shrub lands, Jepson said. She explained that there are a variety of threats facing yellow-faced bees, including “feral pigs, invasive ants, loss of native habitat due to invasive plants, fire, as well as development, especially in some for the coastal areas.”

Karl Magnacca, a Hawaii-based entomologist who worked with Xerces throughout much of the initial research, said it has taken nearly a decade to win federal protection for the bees, and added:

“It’s good to see it to finally come to fruition.”

Magnacca said the bees “tend to favor the more dominant trees and shrubs we have here.” She went on:

“People tend to focus on the rare plants, and those are important, that’s a big part of the diversity. But the other side is maintaining the common ones as common. (The bees) help maintain the structure of the whole forest.”

There are many other rare insects worthy of protection, according to Magnacca. He said:

“It may not necessarily be appropriate to list them as endangered, but we have this huge diversity that we need to work on and protect here in Hawaii. There’s a huge amount of work that needs to be done.”

In total, 10 animal species were granted federal protection: the 7 species of bees along with the band-rumped storm-petrel, the orangeblack Hawaiian damselfly and the anchialine pool shrimp. It also added 39 species of plants native to Hawaii.

According to Hawaii’s Division of Forestry and Wildlife, the yellow-faced bees – genus Hylaeus (Hymenoptera: Colletidae) – were once described in the late 19th century by early naturalist R.C.L. Perkins as “almost the most ubiquitous of any Hawaiian insects.”

Thirty-three of these bee species were placed on the U.S. Fish and Wildlife Service Category 2 candidate list, and were later reclassified as “Species of Concern” (SOC) in 1996.

The Xerces Society petitioned for the federal listing of the 7 newly-protected yellow-faced bee species in 2009.

The petitioned species include: 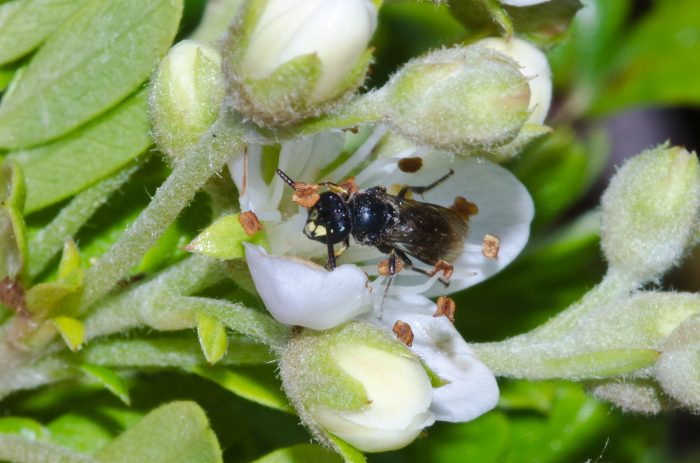 We need bees and other pollinators for the production of fruits, nuts, and vegetables, and they represent billions of dollars in value each year to the United States’ agricultural economy.

Simply put: No bees, no humans.

On the mainland, U.S. Fish and Wildlife Service proposed in late September adding the rusty patched bumblebee, found in the Midwest and Northeastern U.S., to the endangered and threatened species list. [4]

There are several wild bee species that have fallen on tough times over the past 20 years, but the rusty patched bumblebee is the first in the continental United States formally proposed for protections.

The yellow-faced bees’ guardianship under the Endangered Species Act will allow authorities to implement recovery programs, access funding, and minimize potential outside threats to the winged pollinators.

All federal agencies must consult with the Fish and Wildlife service when interacting with endangered species.

Gregory Koob, conservation and restoration team manager for the Fish and Wildlife Service in Honolulu, explained:

“As an animal, it can’t be taken or harmed or killed by individuals. Any research that is done needs a permit from Fish and Wildlife Service unless it’s done by a state agency.” [2]

Under the Hawaii endangered species law, violations “result in a misdemeanor conviction with both criminal fines and administrative fines that graduate for subsequent convictions.” [5]

[3] State of Hawaii, Division of Forestry and Wildlife