It's time to tell your dentist

Did you know that root canals can have untold, negative effects on your health? People are slowly discovering the hidden dangers of root canals as more medical professionals speak out about their dangers. Here is what you need to know.

Dr. George Meinig, author of Root Canal Cover Up, said it best when he quoted Dr. Weston A. Price as follows:

“… when infected teeth produce disturbance in other parts of the body, it is not necessary that the quantity of infection be large, nor is it demonstrated that it is necessary that organisms pass throughout the body or to the special tissues involved, but the evidence at hand strongly suggests that soluble poisons may pass from the infected teeth to the lymph or blood circulation, or both, and produce system disturbance entirely out of proportion to the quantity involved.

The evidence indicates that toxic substances may under certain circumstances sensitize the body or special tissues so that very small quantities of the organisms, which produce the toxin, may produce very marked reactions and disturbances.” (Source: Root Canal Teeth and Cavitations by Lowell Weiner DDS, FAGD)

This quote may be long and sound complex; however, it speaks directly to why root canals should be avoided. Whenever a tooth is root canaled it sets up a situation that is identical to the one described above.

Harmful substances are produced by the infected root canaled tooth which can have serious effects on constitutional health. When these infections and their circulating toxins occur unchecked for prolonged periods of time, systemic damage often results. 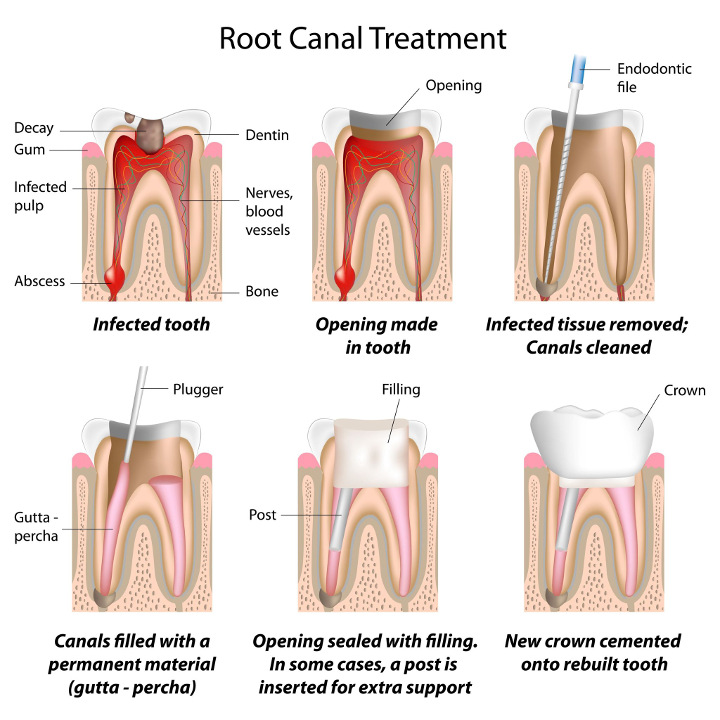 Because a root-canaled tooth is essentially killed in the process, the human body is designed to reject the dead tooth just as it would reject any dead organ or tissue. For this reason, virtually every tooth with a root canal becomes the victim of a low grade focal infection. Because the often imperceptible symptoms associated with them are usually subclinical in nature, the individual may suffer for years, or even decades, completely unaware of the infection.

They are called focal infections because they constitute “an infection in which bacteria are localized in some region, as the tonsils or the tissue around a tooth, from which they may spread to some other organ or structure of the body”. [1]

Even tooth sockets in which root canals once existed are vulnerable to focal infections. When the root canaled tooth is not properly extracted and the roots are left in the jaw bone or the periodontal ligament is not completely removed, there exists a quite conducive environment for focal infections to thrive.

When left to evolve unaddressed, a dynamic is frequently set into motion whereby the focal infection will travel via the blood stream or lymphatic system. In this way, specific organs or tissues are targeted which are then weakened considerably over time.

Many a heart attack or stroke, kidney failure or liver dysfunction has actually been caused by these types of focal infections in the mouth. Because they so often go undetected by the dentists, as well as undiagnosed by physicians, these infections serve to profoundly undermine the health of the unsuspecting.

What else makes root canals and old cavitation sites so dangerous?

The longer an infected root canal or cavitation site goes unaddressed, the greater the likelihood that it will develop into a full-blown infection. However, it is what typically occurs during the low grade infection stage that does the most to injure various internal organs and/or organs systems.

The focal infections which develop in compromised teeth and cavitation sites target different parts of the body. Some researchers call these signature points which are vulnerable organs and/or tissues which can ultimately be weakened to the point of organ failure.

Other investigators have postulated that the specific meridian of the concerned tooth socket will determine the affected part of the body. Each meridian correlates directly with a different part of the body as the chart that follows indicates.

Root canals ought to be avoided by every means possible. That often means that a seriously ailing or irreparably damaged tooth must be extracted. Unfortunately, a properly executed extraction is usually the only healthy resolution unless the tooth can be brought back to a satisfactory condition without a root canal.

The longer that root canals sit in the mouth, the greater the likelihood that health issues and medical conditions will develop. As the immune system becomes over-taxed by having to address any number of focal infections in the mouth, ultimately the individual can experience different types of auto-immune illness.

In light of these unfavorable realities, it should be clear that the only good root canal is the one that is never performed.