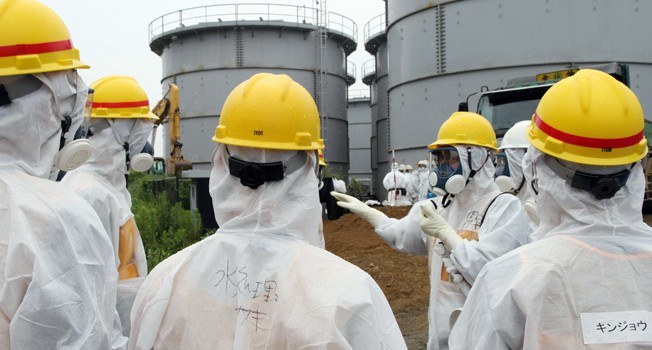 This week, radiation levels at the Fukushima nuclear power plant in Japan hit a “new high”, according to officials there. While the Tokyo Electric Power Company (TEPCO), who owns the site, seems to have been content painting a rosy picture for the world, the situation has been worsening. Now, someone standing near the plant would receive a fatal dose of radiation in only a matter of hours.

Officials with the Nuclear Regulation Authority measure as much as 2,200 millisieverts (mSv) present, far more than the 1,800 mSv measured only four days prior. While both levels are enough to kill someone in a matter of hours, the concern is that the contamination levels are continuing to climb. It seems that radiation levels have often been higher than announced since the beginning.

An issue is the tanks holding contaminated water used to cook the leaking reactors following the massive earthquake and tsunami that hit Japan in March 2011. These tanks sit on a hill above the Pacific Ocean, and concern is that they are leaking into the groundwater and flowing into the sea.

Tokyo Electric Power Company (TEPCO) only admitted to the leak last week when one of the more than 1,000 temporary water storage tanks discharged as much as 300 tons of radioactive water. The big question is where did the water go?

TEPCO is quick to say that the problem can be contained. They are planning an underground barrier of sorts, actually freezing the earth surrounding the plant in an effort to keep the contamination from leaking into groundwater supplies. As for the radiation that’s already leaked out—we can only assume it’s already there.

Trade and Economy Minister Toshimitsu Motegi says TEPCO has been content to play “a game of whack-a-mole with problems at the site,” according to RT.com.  Japanese Prime Minister Shinzo Abe agrees, saying he will take “take the lead” on managing the problem, “resolutely implementing drastic measures.”

The Japanese government as a whole is hoping to speed development of a water treatment system, according to The Guardian, one that can remove radioactive substances from the water. Though TEPCO themselves constructed such a facility, it has not been put to use as the equipment failed a trial run.

As Japan works to get control of the radiation leak, and officials downplay any effects that the catastrophe could be having on the world’s water supply and sea life, let me remind you of a very basic science lesson: the earth’s water cycle moves in a sort of circular motion, where it is constantly traveling, from sea to clouds, into precipitation which travels back to the ground. All ground water and fresh water supplies then travel towards the ocean. This is elementary. And despite what we might hear from officials trying to calm our concerns, it’s exactly what’s happening in Japan, the Pacific Ocean, and therefore throughout the world.