3 Disturbing Fukushima Facts the Government Is Covering Up 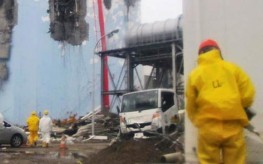 The mega Fukushima meltdown continues to assault the planet on a daily basis with barrages of radioactive fallout that have infiltrated everything from our international food supply to the Pacific Ocean. But instead of alerting us to this reality and helping us to be prepared for what’s coming, both the United States and Japanese governments have chosen to ignore and downplay the devastating effects of Fukushima in order to pretend that nothing is wrong.

And in return, of course, the result is the continued and unchecked nuclear contamination of the planet — and it’s getting worse. Let’s examine a number of deeply disturbing facts regarding Fukushima’s increasing emission of radiation, the advancing stages of meltdown, the downright insane management of the disaster, and of course how it is affecting us on a daily basis.

One of the most absurd lies put forth by TEPCO (Fukushima plant operator Tokyo Electric Power Co.) and backed by the government is the notion that Fukushima is really nothing to worry about. In fact, the incident was classified as a ‘Level 1 anomaly’ before it was revealed that radiation levels were skyrocketing to new highs as recently as September 4th of 2013. And it was this same revelation last September that forced the Nuclear Regulation Authority (NRA) to acknowledge this reality and change the classification of the Fukushima disaster to a Level 3 ‘Serious Incident’.

The radiation levels were high enough to kill an unprotected human within hours.

The very core of the Fukushima disaster timeline that has been regurgitated by the mainstream media and government agencies alike was almost exclusively based on information provided by plant operator TEPCO — a company that is now on record as having lied to the population of the world in a major way. And there were no signs they would ever tell the truth unless forced to. It wasn’t until an independent investigation revealed the actual levels of radiation released from the plant (around 2 1/2 times more than TEPCO would even admit) that TEPCO was forced to go on record and state that the radiation levels they released were indeed much lower than reality.

We can only imagine what else they are lying about.

The independent investigation into Fukushima radiation levels not only exposed the lies by TEPCO regarding the radiation explosion at the plant, but that around 78% of the caesium-137 released by the plant was funneling into the Pacific Ocean. The plant now states that the three reactor meltdowns at the Fukushima Daiichi plant released about 900,000 terabecquerels of radioactive substances. About 20% fell on Japanese land, 2% somewhere on land outside the country, and a whopping 78% remainder is believed to have entered the Pacific Ocean.

Meanwhile, fisheries continue to operate and governments continue to pretend nothing has gone wrong. And at the same time, the mainstream media pushes the propaganda that Fukushima is nothing at all to worry about — just keep eating seafood from Japan and don’t mind the fact that radiation levels are still spiking. And definitely don’t mind the EPA raising ‘acceptable limits’ of radiation in your food supply.

The answer is clear: exposing this information and inciting a reality check throughout the planet is essential to actually forcing the establishment to respond to Fukushima. Unfortunately, it once again appears that we are required to fend for ourselves on a survival level until we can reach the point where the public has truly had enough.

Personally, after speaking with top doctors and creating what is now a top natural health website worldwide, I teamed up with the internationally recognized expert Dr. Edward Group to create what is now the only form of nascent iodine I use — the Infowars Life Survival Shield nascent iodine product. A form of iodine that doctors have been utilizing for years since we have seen the incremental and intentional removal of iodine from the food supply at large.

It is essential to spread the word on the devastating depth of Fukushima before we see even higher levels of radiation enter the biosphere through the mismanagement and downright blackout surrounding the entire event on behalf of the government.