Radiation | Unsafe at Any Dose 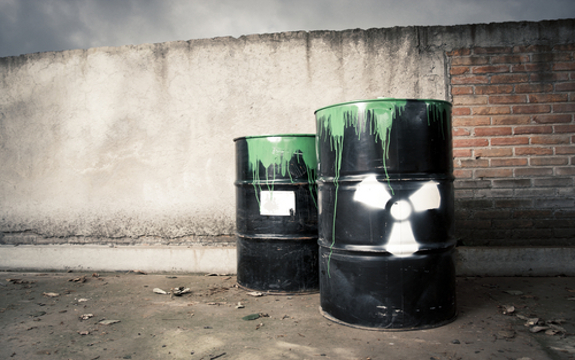 Radiation, also commonly referred to as electromagnetic radiation (EMR), electromagnetic chaos (EMC), and electromagnetic frequencies (EMF), is not a simple topic to discuss. Every day, people are subject to some degree of radiation exposure, whether it be from natural sources such as radon, or from unnatural, man-made sources such as medical tests, body scanners, cell phones, and many more technologies. There has been much debate over just how harmful radiation is, but one thing has been made clear through hundreds of studies and years of research – no amount of radiation is, can, or should be deemed “safe”.

What is radiation and where does it come from?

The remaining radiation exposure, which is unnatural or man-made radiation, comes from:

According to the Environmental Protection Agency (EPA), approximately 80% of the radiation humans are exposed to is naturally occurring, while the remaining 20% branches from man-made radiation.

How is radiation measured?

Radiation is measured in units called “rem” unless when referring to the metric system, in which case it would be referred to as “sieverts”. Here are two different charts pulled from WINA, Radiologyinfo.org, Reuters, and Harvard Medical School: 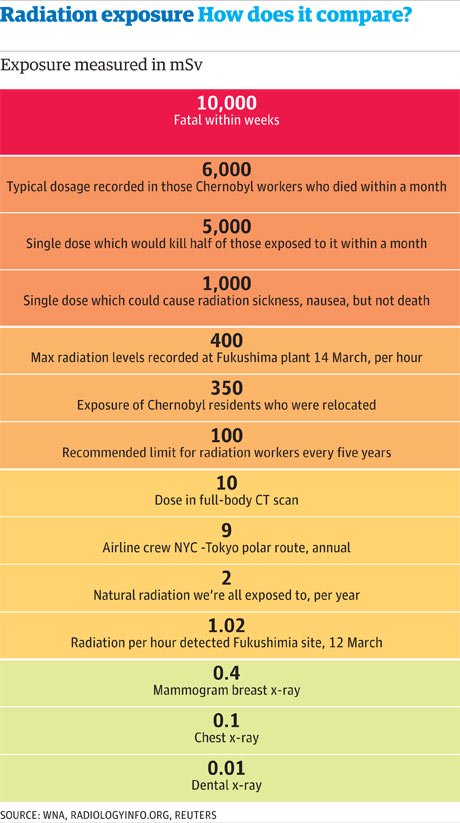 In 1986, the largest nuclear power plant eruption occurred in Ukraine known as the Chernobyl disaster. In this event people were exposed to more nuclear radiation than ever before recorded in history. More recently, the nuclear plant incident in Fukushima, Japan harnessed growing concerns globally not only for the people in Japan, but also for people in other parts of the world that may be impacted by the radiation, as it would slowly encompass different regions. Here are resources to keep an up-to-date mental note of just how bad the nuclear radiation disaster is at this very moment. Note that levels have changed since the time of this writing.

Nuclear radiation depicted in the US, updated in real time every minute

Nuclear radiation measurements in Japan, in light of the Fukushima event

To what extent should people worry about radiation?

Unfortunately, radiation exposure is unavoidable as radiation is everywhere at all times. No matter where you are, some type of radiation is being emitted near you either by a nuclear plant nearby, radio towers, the TV in your living room, or from within the earth’s crust. There are many factors that must be taken into consideration when discussing radiation exposure and its dangers. Here are factors to consider, with each one able to be controlled to some extent for radiation protection.

The amount of radiation the average person is exposed to annually is 620 mrem, according to the EPA. Of course, exposure varies based on how often X-rays are administered, how often flights are taken, how much radon is in our homes, and many other factors.

The concentration of radiation is also very important. As an example. there has been much debate over body scanner’s in airports and the radiation emitted by them to travelers. To someone who travels all the time, this radiation is a larger threat than to someone who seldom travels. Though there has been much dispute over this topic, with some arguing that the scanners pose no health risk, many doctors couldn’t disagree more. Below is an excerpt from a letter written by doctors John Sedat Ph.D., David Agard, Ph.D., Marc Shuman, M.D., and Robert Stroud, Ph.D from the University of California, San Francisco faculty. There is simply a significant difference between radiation that is concentrated to one specific area and radiation allocated throughout the entire body.

“Unlike other scanners, these new devices operate at relatively low beam energies (28keV). The majority of their energy is delivered to the skin and the underlying tissue. Thus, while the dose would be safe if it were distributed throughout the volume of the entire body, the dose to the skin may be dangerously high.”

The quote above can be found in this article.

Similarly, cell phones cause a relatively low amount of radiation, but all of that radiation isfocused directly on the brain. The microwaves exuded from a cell phone, depending on how far the antenna is from the head (proximity), can penetrate as much as 1 1/2 inches into the brain. These microwaves cook the brain from the inside out just as a microwave oven cooks food from the inside out. The effects of radiation can be detrimental over a long period of time, especially when the radiation is focused on such a sensitive part of the body.

As mentioned, the radiation coming from sources like body scanners and cell phones aren’t particularly powerful. If those waves were as powerful as waves stemming from an explosion of a nuclear reactor, things would be very different. The intensity of the nuclear radiation resulting from a nuclear reactor is much more harmful. This radiation also differs from a cell phone since the radiation from an explosion hangs around for a much longer duration, causing even more need for radiation protection.

Either way, it isn’t just one source of radiation which poses a health threat – it’s all of them combined. Someone might say that the radiation emitted from airport body scanner’s is safe, or that the radiation from medical tests are so low that there is no worry. However, whether they are safe at low doses or not, when all of these sources are combined, the chance of reaching acute radiation sickness increases.

So are single factors such as the scanners a huge threat alone? Maybe not, but including that radiation dose with all other “small” doses of radiation coming from various other sources may eventually lead to a health problem.

Health risks of being exposed to too much radiation

Do the benefits outweigh the risks?

Just like anything else in life, a topic like this needs to really be put into perspective. It has already been established that no amount of radiation should be considered safe, but should this cause monumental concerns?

Driving, for example, exposes you to some small amount of radiation. Is it really necessary to impound your car and buy a bicycle in order to avoid the small amount of radiation from driving? Probably not, since the benefits in this case outweigh the risks for the vast majority of people. Instead of stressing out about the radiation from activities such as driving, omit another source of radiation exposure from your life. Simply by talking on your cell phone less will result in less radiation exposure. Even placing your cell phone far away from you instead of in your pocket at all times limits exposure. Although it’s a small amount, it is a very simple solution.

Everything in life has a benefit and a risk. What you need to decide for yourself is if the benefit outweighs the risk. There is always room for improvement, but we should never stress out too much while making these improvements.


What can I do to protect myself from this electromagnetic chaos?

Radiation protection is key in todays society. The necessary protective precautions that should be taken to protect oneself from radiation vary based on the factors listed above: amount or quantity, concentration, focus, proximity, intensity, and duration of the radiation exposure.

Due to the ongoing bombardment of electromagnetic chaos in today’s world, it would also be extremely beneficial to invest in a electromagnetic chaos eliminator. Various websites can provide you with pendants, rings, and even decorative items for your house which will neutralize the EMC waves.

By neutralizing the electromagnetic chaos in your home, you will feel better, healthier, happier, and more alive.

What about nuclear fallout?

For more serious situations such as the nuclear disaster in Fukushima, a supplement known as Potassium Iodide (KI) has received massive recognition as a solution to radiation exposure. Ever since the nuclear disaster at Fukushima, many stores have even sold out of this supplement, with consumers ingesting as much as 130mg.  Taking a large dose of iodide can be a great method for warding off radioactivity. This method of protection, however, should not be adopted by everyone who is concerned about radiation exposure. Although it may help for some people exposed to massive amounts of radiation, it could cause a great deal of thyroid toxicity. Instead, people who are preparing for a radioactive cloud to pass by should take smaller doses of this supplement for protection.


Most people are iodine deficient. The thyroid’s job is to produce hormones to carry out various functions, and it does this through iodine absorption. If iodine is not available for the body to absorb then it will devour it from the environment. When someone is deficient in iodine while being exposed to radioactivity, the body will indistinguishably absorb that toxic radioactive iodine. This leads to damage to your thyroid, and ultimately to radiation accumulation. By giving your body non-toxic iodine, it will readily absorb that iodine instead of the radioactive cloud that passes. In addition, the supplement will protect you from fluoride, bromine, and chlorine damage.

The amount of potassium iodide taken varies based on exposure levels. Some experts recommend that taking 130mg of potassium iodide a day is sufficient, but controversy stirs in this topic. Other experts believe 130mg is way too much, and that a dose as small as 12.5mg daily should be taken for sufficient protection. It is also important to consider that taking this supplement will only protect you from radiation for about one day and won’t undo radiation you may have already been exposed to.

According to the Centers for Disease Control (CDC), the possible risks of taking KI are:

These possible risks are only likely to occur if you:

Other forms of protection from nuclear fallout


Sea vegetables  – Like all vegetables, vegetables from the sea are extremely nutritious. Consuming vegetables such as kelp can provide you with enough iodine if you are unable to supplement or would rather obtain it from a food source. The problem with sea vegetables, however, is that they are very likely to be toxic.  Just like all fish, sea vegetables have been found to be contaminated with mercury, PCB’s, and dioxins. When choosing to go with kelp instead of supplementing with iodine, be sure to have a way of knowing if it is toxic or not.


Chlorella – Chlorella is full of chlorophyll, which wards off radiation.


Spirulina – Spirulina has been been shown to not only enhance the immune system and reduce cholesterol, but also protect the body from radiation.


Vitamin C – Vitamin C is a powerful anti-toxicity nutrient. Everyone should be taking vitamin C regularly not only for its numerous health benefits, but also for its ability to prepare and strengthen your body for an upcoming toxic attack.

It seems radiation will always be a part of our lives. Taking measures for protection is recommended, but it’s important to remember not to panic because of any radiation you have been exposed to. Keeping stress levels down will keep your immune system stronger, and fighting off anything and everything that is harmful will be that much easier.

References for this page include: