Do your research before buying 'Zika prevention' products

On August 3, New York attorney general Eric Schneiderman warned that hucksters were peddling bogus Zika virus prevention products, and told manufacturers that he would “shut them down.” [1]

For the most part, Americans aren’t freaking out over Zika. According to a new CCN/ORC poll, just 23% of respondents said they are at least somewhat worried about themselves or a family member catching the virus, but 77% said it’s not weighing heavily on their minds. [2]

Still, many Americans are taking at least basic precautions against mosquito bites. Even if Zika weren’t in the United States, they’d likely be trying to avoid the itchy red welts.

For a lot of people, protection from mosquitoes means high-test bug repellents loaded with insecticides and chemicals. For others, like me and probably many of you, that type of prevention seems more dangerous than the Zika virus.

Well, the government is usually pretty quick to wrongfully give all-natural products the thumbs-down, taking action against questionable claims and solutions is sometimes the right move. So let’s take a look at some of the ones drawing the most ire from politicians and lawmakers. 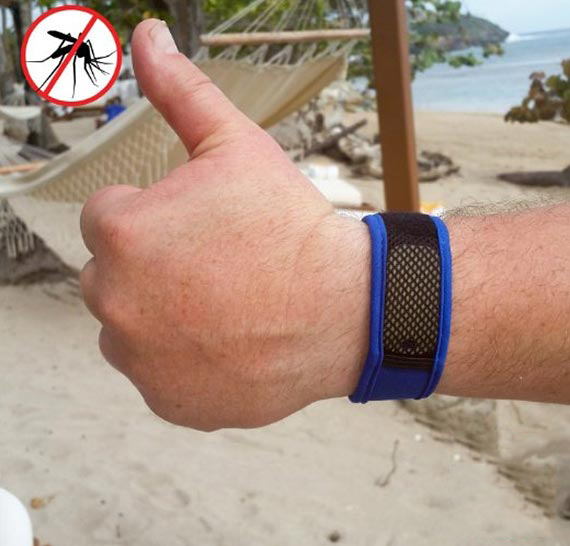 The products Schneiderman is taking aim at include items like wristbands, patches, and even ultrasonic devices that he sarcastically said “plug into your wall and supposedly it gets rid of mosquitoes, rodents and I don’t know what else — gamma rays coming from Martians.” [3]

A few examples of the products he was referring to:

Also under the gun are products based in B vitamins and essential oils.

According to The Atlantic, products based in vitamins and essential oils “are not supported by evidence or approved by the U.S. Centers for Disease Control and Prevention.”

I tried looking up the Wild Outdoors Natural Mosquito Repellent Bracelet and the Kenza High Quality Zika Mosquito Repellent Smiley Patch to find out what was in them. However, they’ve apparently already been removed from the Internet, so there’s no way of really knowing.

Citronella oil has been used for centuries as an effective mosquito repellent.

And check out what a study published in March 2011 in Malaria Journal had to say about essential oils as natural mosquito repellents:

“Many commercial repellents contain a number of plant essential oils either for fragrance or as repellents including peppermint, lemongrass, geraniol, pine oil, pennyroyal, cedar oil, thyme oil and patchouli. The most effective of these include thyme oil, geraniol, peppermint oil, cedar oil, patchouli and clove that have been found to repel malaria, filarial and yellow fever vectors for a period of 60-180 mins.”

This study was done before the Zika virus arrived, of course, but it still indicates that some essential oils work against mosquitoes. These oils don’t last very long, but they do work.

Another study, published in Phytotherapy Research in 2005 looked at 38 essential oils against mosquito bites. The researchers found that “Clove oil gave the longest duration of 100% repellency against all 3 species of mosquito [the team studied].”

Again, that was before Zika, but you get the idea.

What About B Vitamins?

If you decided to research B vitamins as a mosquito repellent, you’ll mostly find mostly negative results.

In a study comparing mosquito repellents, Dr. Immo Hansen, professor at the Institute of Applied Biosciences at New Mexico State University, and his colleagues tested a vitamin B1 skin patch. The result?

“We didn’t find any evidence that it has any effect on mosquitoes.”

In another study, published in the Journal of the American Mosquito Control Association, researchers “tested whether ingestion of vitamin B supplements under various regimens affected the attractiveness of volatile skin compounds transferred to glass vials.”

In that case, they found:

“Although there was substantial and consistent individual variation in attractiveness, we found no effect of vitamin B supplementation.”

And when researchers at the University of Wisconsin asked volunteers to take placebos or capsules containing vitamin B, “they did not find any evidence that the substance could help reduce mosquito attraction.”

What the Fuss is Really all About

The products themselves cannot be verified by the CDC, the EPA, or the FDA as effective, because they haven’t been tested by any of the agencies.

And in some cases it’s painfully obvious that they’re bogus. Take Zika Shield Mosquito Repellent Bands. The product claims on the packaging that the bands are “Specially formulated to prevent mosquito bites that may cause the following insect-carried diseases:

Well, sorry, but you can’t “specially formulate” a repellent to ward off certain kinds of mosquitoes.

Another product, the STAR Ultrasonic Pest Repeller claims in its online marketing (I won’t provide a link, but feel free to look it up) that it:

“features the newest technology of highly-effective ultrasonic frequencies, being extremely irritating to rodents and insects thus causing them to run away and find a peaceful place. The variable technology frequency waves ensure that pests do not get immune to the sounds. With these sounds not letting up, all rodents and insects will be forced to leave your home fast and without any poisons and costly treatments.”

And this works by emitting:

“super-powerful deep penetrating electromagnetic waves which prevents insects, rodents, and pests from entering your home. The patented electromagnetic causes in-wall wiring to send electronic pulse signals, thus acting as a shield and effectively preventing pests from passing through your home’s walls. It also disturbs existing rodent and insect nests; causing all pests to leave your walls and home. Outdoor rodents, pests and insects will no longer want to enter your home.“

The main takeaway point here is that our current research doesn’t exactly lend strong support for these claims, and that you may be disappointed investing in this produce. But maybe it works in some cases. To be fair, this product did get a lot of positive reviews online, but there’s no way of proving that it was the ultrasonic pest repeller that did the trick.

If you live in a Zika-affected area, such as the Wynwood neighborhood north of Miami, you should wear long pants and long-sleeved shirts and use insect repellent. (I realize covering up in late summer in Florida sounds miserable.)

Make sure your doors and windows have screens that are free of holes and tears, and stay indoors where there is air-conditioning, whenever possible.

Mosquitoes lay their eggs in standing water, so if you have any on your property of business, take care of it. Even small puddles make a great home for virus-ridden skeeters.

Just be sure to do your research.