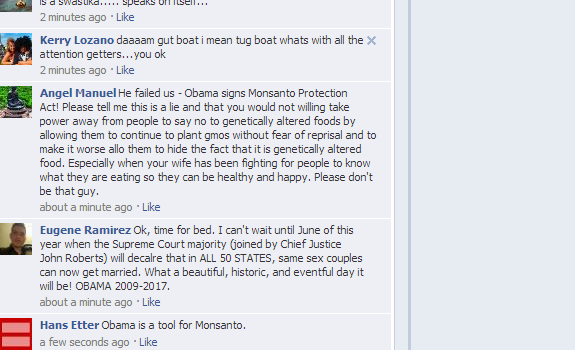 While Monsanto executives may be rejoicing behind the closed doors of their corporate offices, they have also just stabbed themselves in the heart with the blatant and cocky decision to go through with the Monsanto Protection Act. Obama’s social media profiles are being blown up with thousands of enraged activists and concerned citizens who are demanding answers.

Thanks to the alternative news covering every angle of the Protection Act and the absurd fact that Monsanto actually wrote the rider itself, people have now come to fully understand just how deep the corruption goes when it comes to Monsanto’s Big Food monopoly. And it doesn’t exempt the President.

It’s a well known fact that the Obama family actually eats from the White House organic garden which was planted in 2009 and has full time staffers who maintain and harvest organic produce that comes from the garden. Many high level politicians actually refuse to eat anything but organic, as they are fully aware of what’s in ‘conventional’, GMO-loaded items. Yet, despite this knowledge, they are quite eager to push Monsanto’s GMOs and ruthless business model on the citizens of the United States.

And the people are fully aware of the betrayal.

Scanning just a few comments amid the thousands calling out Obama for his signature on the spending bill that contained the Monsanto Protection Act, we find seriously frustrated activists and voters who can’t believe what they are seeing. Even many Obama campaigners who came to the realization that Obama didn’t represent what they thought he did. One specifically mentions how Obama promised to label GMOs in 2007 upon taking the seat of the President. A promise that never came to fruition. In fact, no real attempts were made at all.

Here are a few comments among the thousands that I found interesting on Obama’s wall:

Overall, the decision to go with such a major act of corruption has jump started a massive movement to hold politicians and corporations accountable for their betrayal of the US public. It’s a move that has blown up in the face of those who thought they could slip it through into law.