The evidence from a new scientific research study shows that children who live in water districts where the water supply is systematically fluoridated suffer with ADHD at a significantly higher rate.

“A multivariate regression analysis showed that after socioeconomic status was controlled each 1 percent increase in artificial fluoridation prevalence in 1992 was associated with approximately 67,000 to 131,000 additional ADHD diagnoses from 2003 to 2011.” [1]

For those who are not initiated in the realm of medical statistics, the number of additional diagnoses cited above is extraordinary by any standard of measurement. This study conclusively demonstrates that fluoride exposure among children and adolescents has significant consequences, primarily because of their formative stage of growth and development.

Drinking fluoridated water as a child certainly increases the likelihood that both the assimilation and uptake of a toxic chemical will start a process of bioaccumulation at a young age. Because young bodies are smaller and more sensitive, there is considerably less body mass to buffer the adverse effects of fluoride (such as fluoride lowering IQ).

“In the 1990s, Harvard University conducted a 14-year study that found a link between fluoride and bone cancer. Kidney disease, arthritis, impaired thyroid function, bladder cancer and an increased risk of Alzheimer’s disease are all additional risks associated with fluoride toxicity.” [2]

Pharma Drugs for ADHD are Worse than the Disorder

There are many other scientifically documented health conditions associated with fluoride intake which are much more serious than ADHD. However, it is the medical treatment(s) for ADHD which often clearly cause even more serious future health problems for these fluoridated children.

The various pharmaceutical medications that are routinely prescribed for ADHD are both powerful and dangerous over the long term. Drugs like Adderall, Ritalin, and Wellbutrin each have their long list of adverse side effects. What is not listed in the prescription drug side effects summary are those symptoms that are unique to the child because of their individual biochemistry or genetic predispositions. Nor are those allergic reactions which often develop with the long term usage of these drugs.

The vast majority of “water authorities do not use pharmaceutical grade fluoride; they use hydrofluosilicic acid—a toxic waste product of the fertilizer industry that is frequently contaminated with heavy metals and other toxins.” [3] This particular factoid is perhaps the most alarming about the whole water fluoridation program. What could be worse than exposing highly active adolescents to chemical compounds and toxins which will only contribute to hyperactivity?

Read: 5 Things You Should Know About Fluoride

Attention deficit hyperactivity disorder has been on the rise ever since water districts nationwide have been approving fluoridation regimes. By implementing these water-polluting programs under the guise of a preventative measure for childhood caries, they are often blindly accepted by uniformed parents.

The voters have actually been duped into passing this harmful form of water treatment. The Big Agra corporations which produce this toxic waste have no other use for it, ‘so why not put it in the water.’ This is where they have had to collude with the water district authorities, as well as other city representatives.

Perhaps now that the children of those districts, which add higher amounts of fluoride to the water, are showing signs of even more hyperactivity, the official posture will change. Surely, as more wake up to the truth about the dangers and harm associated with drinking fluoridated water, a sea change in policy will occur. 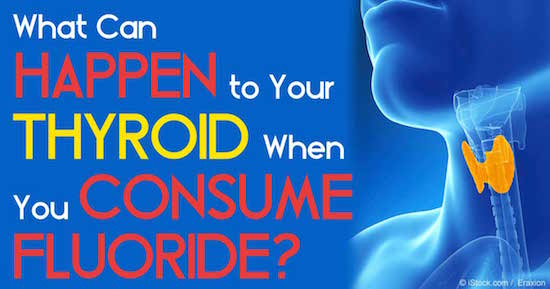 “Fluoride is a toxic drug linked with an array of potentially serious health problems. Most recently, research linking fluoridated water consumption to thyroid dysfunction received attention in both British and American media.” [4]

Hypothyroidism, in particular, can contribute to a whole host of other medical conditions and health problems (here are 7 hypothyroidism natural treatments). When synthetic thyroid is prescribed to treat cases of hypothyroidism, an ADHD-like symptom can result from over-taking the thyroid medication on a regular basis. Because this popular drug produces side effects that actually mimic ADHD, it is important to stop all synthetic thyroid usage before obtaining a diagnosis.