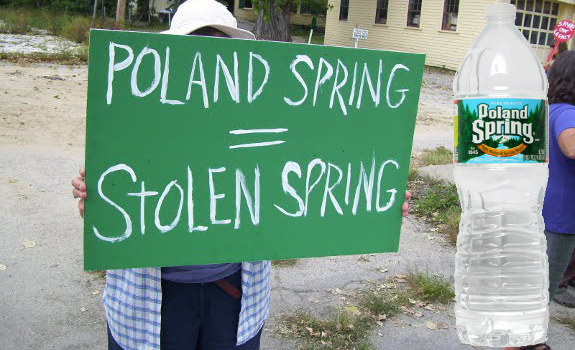 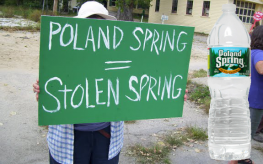 Perhaps you’ve yet to hear of a little town called Fryeburg, Maine, USA. It sits on its own pristine aquifer, but once Nestlé subsidiary Poland Spring moved to town, residents noticed that their streams were getting smaller. It turns out, in its continued efforts to privatize water, the company was pumping the aquifer, and then selling the water back to town residents in bottles. Freyburg is fighting back, though.

Nestlé has openly admitted that they don’t think water is a human right. Peter Brabeck-Letmathe, the Chairman and CEO of Nestlé, stated so openly in public, only to back-paddle later once activists accused him of being singularly interested in corporate profits and not water conservation, as he claimed. You can see him admit his true stance in this video.

When lakes and streams started to be depleted in Freyburg (that’s some water conservation, Nestlé) the residents spoke up, and the company then launched an aggressive, divide and conquer campaign.

The corp sued the town, almost bankrupting several water advocacy activists, and worked with the city board members to ensure their ongoing access to the town’s water. Nestlé took the case all the way to the Supreme Court when Freyburg wouldn’t just lay down and take it.

Furthermore, Nestlé also set up a Poland Spring shop for outreach, and established the Fryeburg Business Association staffed by a Nestlé employee. What this corrupt company is trying to do is get people to accept this as the norm: water they have to pay a corporation for, even though it was abundant and free prior to Nestlé’s interference.

Activists have taken up a new plan to try to defeat Nestlé, launching an education campaign to try to get residents to reclaim their water rides and pride of ownership in what was already theirs before a corporate monopoly moved to town. They are passing out re-usable water bottles to Fryeburg residents stamped with the message, “we don’t want your bottled water!”

Freyburg has won suits brought against them five times (and appealed) by Nestlé. Nestlé’s lost all four (one is still pending), and in one instance, the company’s lawyers argued in front of the Maine Supreme Court that their right to grow market share superceded the town’s right of control. You can see a video of that here.