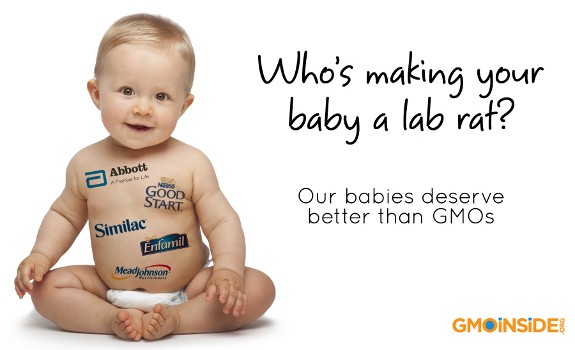 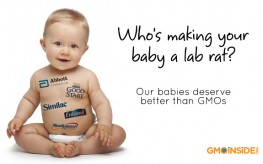 Why has Nestlé, who owns a baby-formula producing company called Gerber, removed GMOs (genetically modified organisms) from baby foods and formulas in South Africa and not in the United States? Perhaps because South African parents are more vocal than Americans. Or it might also be because corporations conducting business in the U.S. are protected by government agencies who don’t seem to give a hoot about public health – not even of our most fragile citizens. Maybe it’s time we speak out for the sake of children’s health.

Nestlé has gone on record stating:

“. . . it took consumer preferences into consideration and therefore all its infant cereals in South Africa used non-GM maize,” according to GMWatch.

Now, Nestlé’s infant formulas and cereals, at least in South Africa, seem to indicate that Nestle is going GM free.

Meanwhile, Europe and other countries report that Nestlé does not use GMO in their baby products – and the U.S. versions still contain them in high quantities, even though Purity brands has now gone GMO-free.

Nestlé is in the company of Abbott Laboratories (makers of Similac), and Mead Johnson Nutrition (makers of Enfamil), who are also exposing American and Canadian babies to unhealthy and under-studied GMOs.

The top-selling formulas of these companies, which combined account for 90% of formula sales in the U.S., contain corn, sugar, or soy—all ingredients which are highly likely to be genetically engineered. And for now, the companies are not required to disclose that these products contain these health-harming ingredients.

These companies have also contributed vast amounts of money to defeat GMO labeling in the U.S.:

Perhaps these contributions to our Congress and Senate members are the real reason why our babies are still being fed GMO formula and cereal in the U.S. while these toxic ingredients are banned or omitted in other countries.