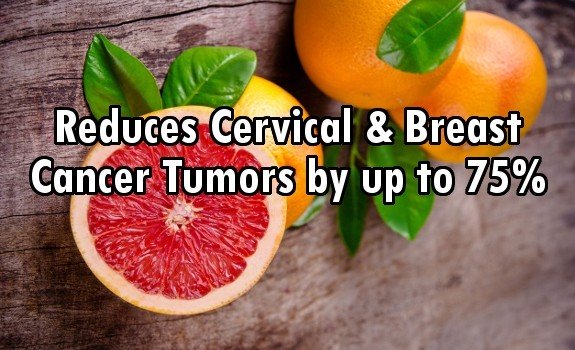 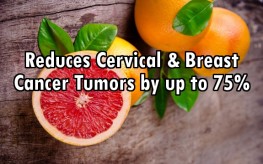 Studies show how people suffering from cancerous tumors due to malnutrition and cachexia (high levels of inflammatory cytokines in their cells which causes weakening or severe illness) responded exceptionally well to treatment with naringin, a compound found in grapefruit. While laboratory animals have been tested most prominently for their response to naringin, there are hundreds of other studies carried out on people, as well. In many of these studies ‘complete tumor regression’ ensued.

In one instance, women suffering from cervical cancer who used naringin experienced a ‘marked ability to inhibit preclinical models of epithelial cancer cell growth and tumor formation.” In other studies, naringin caused apoptosis (suicide) of cancerous cells. Naringin is both a chemopreventative substance and anti-carcinogenic. Specifically, SiHa cancer cells were affected by this citrus compound:

Furthermore, utilizing naringin in these patients, an increased expression of caspases, p53 and Bax, a death receptor and adaptor protein which help to cause cancerous cell death, were increased. This means that naringin works by both inhibiting cancerous cell formation through mitochondrial pathways and through increasing death-receptor pathways.

When naringin was administered to help women suffering from breast cancer, it inhibited cancerous cell proliferation and also induced apoptosis in TMBC cells (cancerous cells). Breast cancer cell lines were destroyed and could not re-establish as a full-fledged tumor. Interestingly, many women develop breast cancer as a result of being exposed to radiation in mammography and chemotherapy, but naringin even protects against radiation-induced chromosome damage.

What’s more, naringin acts as a free-radical scavenger, namely through its antioxidant activity. And since free radicals are part of what causes cellular DNA damage, and the formation of aberrant chromosomes which often lead to cancer and other diseases, naringin is also a protector of healthy cells in the body. It is through this activity that naringin can protect us against radiation-induced free-radicals. Mice treated with naringin in lab prior to being exposed to unhealhty levels of radiation showed fewer chromosomatic breaks, centric rings, and aberrations – all precursors of cancerous cell growth, and chromosomal DNA damage.

While the exact dose of grapefruit naringin to be administered in humans for the most efficacious results has yet to be studied, we can be sure that this citrus flavanoid shows great promise in reducing both cervical and breast cancers, and possibly others.